An irreverent, provocative, and visually fascinating look at what our on-line lives reveal about who we really are – and how this deluge of data will transform the science of human behavior

DATACLYSM
Who We Are (When We Think No One’s Looking)
by Christian Rudder
Crown, September 2014

7-figure deal with Crown for North American Rights following an 11-party auction. Sold in seven foreign territories including at auction in the UK. Announced 1st printing 125,000 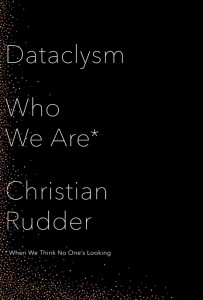 Big Data is used to spy on us, hire and fire us, and sell us things we don’t need. In Dataclysm, Christian Rudder puts this flood of information to an entirely different use: understanding human nature. Drawing on terabytes of data from Twitter, Facebook, Reddit, OkCupid, and many other sites, Rudder examines the terrain of human experience to answer a range of questions: Does it matter where you went to university? How racist are we? How do political views alter relationships?
Rudder shows that in today’s era of social media, a powerful new approach is possible, one that reveals how we actually behave when we think no one is looking. Outrageous and illuminating, filled with engaging charts, graphs and photos, Dataclysm is a portrait of our essential selves and a first look at a revolution in the making.

Christian Rudder is co-founder of OkCupid and now serves as chief data analyst and author of the popular blog OkTrends. He graduated from Harvard in 1998 with degrees in English and Math.