Bill, a wily young Teddycat, accidentally reveals his previously-hidden species to the world. Now everybody, including poachers, scientists and Olingos, are after the Teddycats. Can Bill save his species and fix his monstrous mistake? Or will curiosity kill the Teddycats? 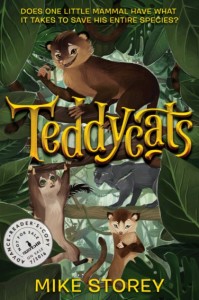 Meet the Teddycats, the elusive creatures that dwell in the Cloud Kingdom, the highest part of the rainforest. The Teddycats owe their peaceful, private way of life to one very special feature: their extremely sharp, incredibly strong claws, which allow them to climb high up into the trees, where a thick layer of clouds keeps them hidden from the dangers of the jungle below.

Enter Bill, a mischievous and charismatic young Teddycat who has always questioned his species’ solitary way of life and the staunch set of rules that keep them that way. Bill routinely sneaks out of the Cloud Kingdom to visit his friends on the jungle floor, and so far he’s never gotten caught. But then one day, Bill does the unthinkable. He brings an outsider up into the Cloud Kingdom, thus breaking the Teddycats’ most sacred rule and exposing their secret location to the outside world.

And it’s not just the other jungle species that know about the Cloud Kingdom–now humans are on the Teddycats’ scent as well. When a baby Teddycat named Molly gets captured by a poacher, Bill must decide whether he’s going to stay behind and follow the orders of his elders, or if he’s going to leave the Cloud Kingdom and use his brains, bravery, and extra-sharp claws to fight for a new way of life for his kind.

Will curiosity kill the Teddycats? Or will Bill find a way to claw his way out of this mess?

Based on a true story! « Teddycat » is the adorable nickname for an olinguito, a real-life jungle species that made headlines when it was first discovered in 2013 by a Smithsonian scientist–the first new mammal discovery of its kind in 35 years! The Smithsonian article introducing this new species aptly described its appearance as a cross between a teddy bear and a house cat–and thus the nickname « Teddycat » was born!

Mike Storey is the pseudonym for Michael McGrath, a writer and teacher living in Maine. Michael holds an MFA from the University of Virginia and his fiction and essays have appeared in Open City, the Paris Review Daily, McSweeney’s, Vice, Deadspin, the Billfold, Gigantic, the Toast and the Millions. This is his first novel for children.