The making of Ernest Hemingway’s “The Sun Also Rises”, the outsize personalities who inspired it, and the vast changes it wrought on the literary world

“Everybody Behaves Badly, Lesley Blume’s gloriously gossipy, compulsively readable account of Hemingway’s early years in Paris with his first wife, Hadley, and the rest of the « Lost Generation, » is a welcome successor to Paula McLain’s novel The Paris Wife. How did Hemingway turn the wild weekends of bullfighting in Pamplona and the alcohol-addled nights in Left Bank cafes into The Sun Also Rises? That’s the serious question at the heart of Blume’s well-researched book.” —Annalyn Swan & Mark Stevens, Pulitzer-Prize winning authors of DE KOONING 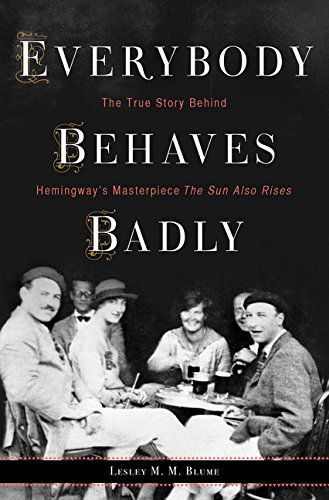 In the summer of 1925, Ernest Hemingway and a clique of raucous companions traveled to Pamplona, Spain, for the town’s infamous running of the bulls. Then, over the next six weeks, he channeled that trip’s maelstrom of drunken brawls, sexual rivalry, midnight betrayals, and midday hangovers into his groundbreaking novel “The Sun Also Rises”. This revolutionary work redefined modern literature as much as it did his peers, who would forever after be called the Lost Generation. But the full story of Hemingway’s legendary rise has remained untold until now.

Lesley Blume resurrects the explosive, restless landscape of 1920s Paris and Spain and reveals how Hemingway helped create his own legend. He made himself into a death-courting, bull-fighting aficionado; a hard-drinking, short-fused literary genius; and an expatriate bon vivant. Blume’s vivid account reveals the inner circle of the Lost Generation as we have never seen it before, and shows how it still influences what we read and how we think about youth, sex, love, and excess.

Lesley M. Blume is an award-winning journalist, reporter, and cultural historian. She contributes regularly to Vanity Fair and the Wall Street Journal, and her work has appeared in many other publications, including Vogue, Town & Country, and Departures. She specializes in stories on historical cultural achievements, and has documented seminal moments in the careers of Jackson Pollock, Truman Capote, and Ernest Hemingway, among other greats.