A thrilling Cold War narrative exploring two harrowing attempts to rescue East Germans by tunneling beneath the Berlin Wall, the U.S. television networks who financed and filmed them, and the Kennedy administration’s unprecedented attempt to suppress both films

THE TUNNELS
Escapes Under the Berlin Wall and the Historic Films the JFK White House Tried to Kill
by Greg Mitchell
Crown, October 2016 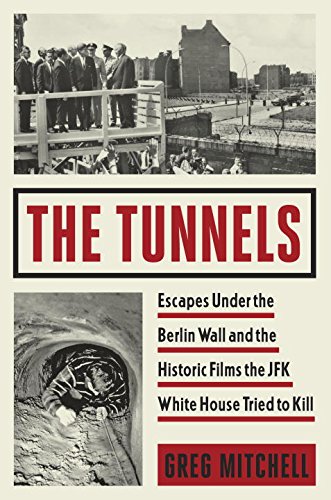 In the summer of 1962, one year after East German Communists built the Berlin Wall, a group of daring young West Germans came up with a plan. They would risk prison, Stasi torture, even death to liberate friends, lovers, and strangers in East Berlin by digging tunnels under the Wall. Among the tunnelers and escape helpers were a legendary cyclist, an American student from Stanford, and an engineer who would later help build the tunnel under the English Channel.
Then two U.S. television networks, NBC and CBS, heard about the secret projects, and raced to be first to air a spectacular « inside tunnel » special on the human will for freedom. The networks funded two separate tunnels in return for exclusive rights to film the escapes. In response, President John F. Kennedy and Secretary of State Dean Rusk, wary of anything that might raise tensions and force a military confrontation with the Soviets, maneuvered to quash both documentaries.
Unfolding week by week, sometimes hour by hour, Greg Mitchell’s riveting narrative deftly cuts back and forth from one extraordinary character to another.  There’s the tunneler who had already served four years in the East German gulag; the Stasi informer who betrays the « CBS tunnel »; the young East Berliner who escapes with her baby, then marries one of the tunnelers; and broadcast legend Daniel Schorr, who battled unsuccessfully to save his film from White House interference and remained bitter about it to the end of his life. Looming over all is John F. Kennedy, who was ambivalent about–even hostile toward– the escape operations.  Kennedy confessed to Dean Rusk:  « We don’t care about East Berlin. »
Based on extensive access to the Stasi archives, long-secret U.S. documents, and new interviews with tunnelers and refugees, The Tunnels provides both rich history and high suspense.  Award-winning journalist Mitchell captures the hopes and fears of everyday Berliners; the chilling reach of the Stasi secret police; U.S. networks prepared to « pay for play » yet willing to cave to official pressure; and a White House and State Department eager to suppress historic coverage. The result is « breaking history, » a propulsive read whose themes reverberate even today.

Greg Mitchell is the author of nearly a dozen books, including Tricky Dick and the Pink Lady (a New York Times Notable Book); The Campaign of the Century (winner of the Goldsmith Book Prize, hailed by Christopher Hitchens as « enthralling »); and, with Robert Jay Lifton, Hiroshima in America (« Devastating and persuasive »–Los Angeles Times). He blogs actively about media and politics, has produced several acclaimed film documentaries, and won numerous awards as the editor of Editor & Publisher.