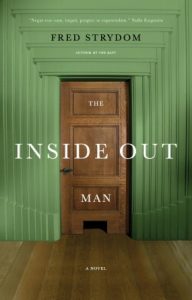 Bent is a brilliant jazz pianist living gig-to-gig in a dark city of dead-ends. With no family, no friends, and plagued by unfinished visions of the past, Bent has resigned himself to a life of quiet desolation. Until the night wealthy and eccentric jazz-fan, Leonard Fry, offers Bent a Faustian deal. A deal unlike any other – an opportunity to start fresh, be someone new. An opportunity to swim from the island of his lost life, to question everything he knew about life and death, power and futility, and to go beyond the one terrifying boundary from which he can’t be sure he’ll ever return … the boundary of his own sanity.

Fred Strydom is a radio and television writer and producer living in Johannesburg. He studied Film and Media at the University of Cape Town and was a member of the Cape Comedy Collective. Fred has published short stories in South African literary journals. His debut novel was “The Raft”.