“The Monuments Men” for book lovers

THE BOOK SMUGGLERS:
Partisans, Poets, and the Race to Save Jewish Treasures from the Nazis
by David E. Fishman
ForeEdge, October 2017 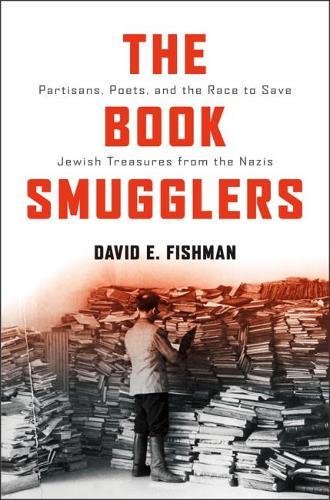 THE BOOK SMUGGLERS is the nearly unbelievable story of ghetto inmates who daringly rescued thousands of rare books and manuscripts from first the Nazis and then the Soviets, by hiding them on their bodies, burying them in bunkers, and smuggling them across borders. It is a tale of heroism and resistance, of friendship and romance, of unwavering devotion to literature and art, and of readiness to risk one’s life for them. Dr. Johannes Pohl, a Nazi “expert” on the Jews, was dispatched to Vilna to organize the seizure and destruction of the city’s great collections of Jewish books. He marshaled forty ghetto inmates to sort and pack the materials. The group, nick-named “the paper brigade,” was informally led by poet Shmerke Kaczerginski (pronounced Catcher-ginsky), a garrulous, street-smart adventurer who was a master of deception. In a nerve-racking eighteen-month project, the members of the paper brigade slipped artifacts past the German guards. If caught, they faced death by firing-squad. Poet Abraham Sutzkever helped build an underground book-bunker sixty feet underneath the Vilna ghetto. Kaczerginski smuggled both papers and weapons, and purchased arms for the ghetto’s secret partisan organization. The members of the paper brigade were all intellectuals—writers, scholars, educators, and artists. But in other respects they could not have been a more varied group. But despite their differences, the group bonded into a fellowship. Kaczerginski and co-worker Rachel Krinsky became lovers, after having lost their spouses to the Nazi murder machine. Most members of the paper brigade did not survive the war. Kaczerginski and Sutzkever fought as partisans in the forests, and returned to their devastated city with the liberating Red Army in July 1944. Determined to retrieve the cultural remnants of their people, and to finish the rescue-operation that they and their now-murdered colleagues had begun, they dug up troves of the rare books and manuscripts. The poet-duo of Kaczerginski and Sutzkever founded a Jewish museum in Soviet Vilna (now called Vilnius) to preserve the cultural treasures, and fought tooth and nail against the Soviet authorities who wanted to close the museum and seize its collection. Their adversary was a special emissary from Moscow named Mikhail Suslov, who later became the Kremlin’s odious chief of ideology. When officials hauled away and destroyed twenty tons of the museum’s books and papers, Kaczerginski realized he needed to rescue the treasures again, and get them out of the Soviet Union. Smuggling books and papers across the Soviet-Polish border was just as fraught with life-threatening danger as the operation Kaczerginski had led in the ghetto. But once in Łódź, Poland, he reunited with Rachel Krinsky, who had miraculously survived a string of concentration camps. How did the paper brigade succeed in whisking the books and documents to freedom, to New York and Jerusalem? Were Pohl and his fellow plunderers brought to justice after the war? The Book Smugglers answers these questions in an inspiring historical drama that pits men and women of letters again two of the most murderous regimes in history.

David Fishman is Professor of History at the Jewish Theological Seminary. He is the foremost expert on the World War II library of the Vilna ghetto.