The definitive memoir of one of Israel’s most influential soldier-statesmen and one-time Prime Minister, Ehud Barak, with insights into forging peace in the Middle East

MY COUNTRY, MY LIFE
Fighting for Israel, Searching for Peace
by Ehud Barak
St. Martin’s Press, May 2018 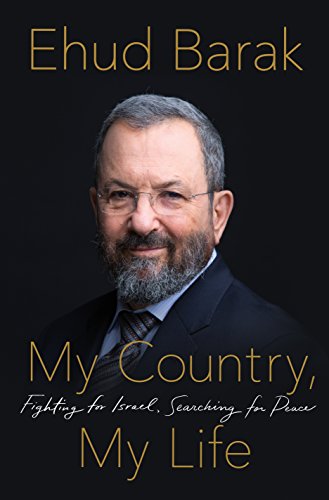 In the summer of 2000, the most decorated soldier in Israel’s history—Ehud Barak—set himself a challenge as daunting as any he had faced on the battlefield: to secure a final peace with the Palestinians. He would propose two states for two peoples, with a shared capital in Jerusalem. He knew the risks of failure. But he also knew the risks of not trying: letting slip perhaps the last chance for a generation to secure genuine peace.
It was a moment of truth.
It was one of many in a life intertwined, from the start, with that of Israel. Born on a kibbutz, Barak became commander of Israel’s elite special forces, then army Chief of Staff, and ultimately, Prime Minister.
MY COUNTRY, MY LIFE tells the unvarnished story of his—and his country’s—first seven decades; of its major successes, but also its setbacks and misjudgments. He offers candid assessments of his fellow Israeli politicians, of the American administrations with which he worked, and of himself. Drawing on his experiences as a military and political leader, he sounds a powerful warning: Israel is at a crossroads, threatened by events beyond its borders and by divisions within. The two-state solution is more urgent than ever, not just for the Palestinians, but for the existential interests of Israel itself. Only by rediscovering the twin pillars on which it was built—military strength and moral purpose—can Israel thrive.

Ehud Barak served as Israel’s Prime Minister from 1999 to 2001. He was the leader of the Labor Party from 2007 until 2011, and Minister of Defense, first in Olmert’s and then in Netanyahu’s government from 2007 to 2013. Before entering politics, he was a key member of the Israeli military, occupying the position of Chief-of-Staff. Barak holds a B.S.c in Physics and Math from the Hebrew University in Jerusalem and an M.Sc. degree from Stanford in Engineering-Economic Systems.