Hillbilly Elegy meets Looking for Alaska in A SKY FOR US ALONE, a gorgeous contemporary debut novel about two teens in a small Appalachian town and the transformative power of love and resilience

A SKY FOR US ALONE
by Kristin Russell
Katherine Tegel, January 2019 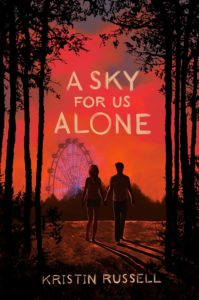 In Strickland County, there isn’t a lot of anything to go around. But when eighteen-year-old Harlowe’s older brother is killed by the Praters, the family who runs everything—from the mines to the law—in his rural Appalachian town, he learns that loss is the one thing that’s never in short supply. Then Harlowe meets Tennessee on her first day in town, and for the first time he feels that something good might happen, that he might’ve found the rarest thing of all: hope. Even as she struggles to protect her younger brother from their father’s abuse, Tennessee makes Harlowe believe that they can dare to forge their own path—if they only give it a shot. But with his mother sliding back into her pill addiction, Harlowe’s reality only feels more fixed. And as he searches to uncover the reasons behind his brother’s death, he discovers truths about the people he loves—and himself—that are more difficult to confront than he ever expected. Now, Harlowe realizes, there’s no turning back. A striking and complex portrait of poverty and addiction, Kristin Russell’s powerful debut novel asks a universal question: when hope seems lost, is love worth the risk?

Kristin Russell grew up in Nashville, Tennessee.  She has worked as a hairstylist for the last seventeen years, and began writing fiction in the break rooms of salons between client appointments.  Steeped in Nashville’s music industry from an early age, Kristin is inspired by well-wrought lyrics and aims to bring the same craft to her fiction.