A tense, page-turning and funny debut, starring Faiza, a Wimbledon yummy mummy who must hide the fact she’s spent the family’s savings when her husband Tom loses his job.

WOULD I LIE TO YOU?
by Aliya Ali-Afzal
Head of Zeus UK, September 2021
(chez Mushens Entertainment – voir catalogue) 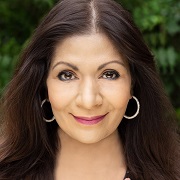 Faiza has it all: a handsome husband, three beautiful children, and an idyllic lifestyle in Wimbledon Village. But then – in the middle of her first botox appointment – she gets a phone call from Tom telling her he’s lost his lucrative banking job. Her world starts to crumble. Tom thinks they will be fine – after all, they have their emergency savings to fall back on. Faiza knows better: she’s spent it. Desperate to avoid telling her husband or her friends that they are now penniless, Faiza decides to keep up appearances – and earn back the money before Tom has noticed its gone. In the process of trying to put it back, can she find the Faiza she used to be, before the trappings of her life overwhelmed her? And then, as one lie spirals into another, she starts to realise that she’s not the only one whose perfect life hides something much darker…

Aliya Ali-Afzal lives in London and is studying for an MA in Creative Writing at Royal Holloway, University of London. She is an Alum of the Curtis Brown Creative Novel writing course, and her writing has been longlisted for The Bath Novel Award, The Mslexia Novel Competition, The Mo Prize Hachette UK, and The Primadonna Prize. Aliya has a degree in Russian and German from UCL, University of London. She moved to London from Pakistan as a young child, and has always lived there, first working as a City head-hunter and then retraining as an Executive MBA career coach before becoming a writer.