Book 1: THE ADVENTURERS AND THE CURSED CASTLE (December 2018)

A mysterious curse has stricken Kexley Castle for generations ever since Egyptian treasure was transported to Cornwall by a 19th Century explorer. Can four young adventurers reveal the secrets that have been hidden for over a hundred years? Join Lara, Rufus, Tom and Barney in their first exciting adventure together as they unravel the mystery and race to find Captain Jack Kexley’s hiding place. To succeed, they must discover and solve a series of clues left by their ancestor, ahead of two unwelcome visitors from the British Museum who are determined to get there first!

Book 2: THE ADVENTURERS AND THE TEMPLE OF TREASURE (June 2019)

Book 3: THE ADVENTURERS AND THE CITY OF SECRETS (April 2020)

Book 4: THE ADVENTURERS AND THE CONTINENTAL CHASE (November 2020)

Book 5: THE ADVENTURERS AND THE JUNGLE OF JEOPARDY (August 2021)

• Shortlisted for the 2022 Children’s Selfies Awards 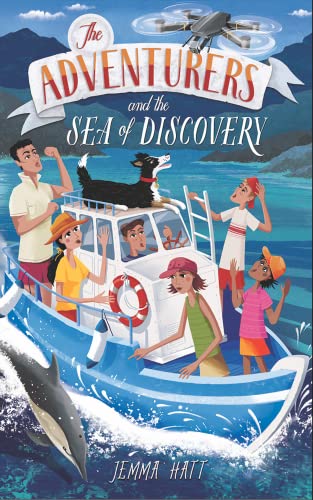 A secret hidden deep under the sea is about to surface… Arriving in Greece on the trail of a missing friend, The Adventurers land themselves in a mystery filled with suspense. An ancient map has been discovered, but where does it lead? Who are the menacing figures pursuing them at every turn? Join Lara, Rufus and the gang as they set sail for an island-hopping escapade!

Growing up near Sevenoaks in South East England, Jemma Hatt developed with a passion for reading and writing short stories, which ultimately led to a degree in English Literature from the University of Exeter. The Adventurers Series was inspired by many family holidays to Devon and Cornwall as well as the mysteries of Ancient Egypt. After having lived and worked in London, New York and Delaware, Jemma is living in Kent and working on the next Adventurers stories as well as other writing projects.