Love, War and a Ruined House in France 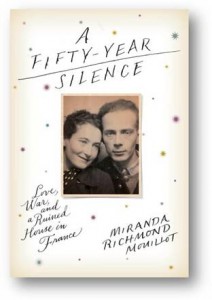 In 1948, Miranda’s grandparents, Armand and Anna, who had survived Nazi-occupied France, bought an old stone house in the south of France. Her grandmother, a physician, and her grandfather, later an interpreter at the Nuremberg Trials, had survived the war in France through a combination of luck and wits. Five years later, Anna packed her bags and walked out on Armand, taking his typewriter and their two children. The two never spoke to each other for the rest of their lives. No one in the family knew why or dared to unravel the mystery, but Mouillot’s curiosity and need to understand her heritage compelled her to break the silence. Why is her grandfather so angry with her grandmother, refusing for 50 years even to utter her name? The intertwined narratives form a seamless whole that touches on some very big issues: how history, family, and the individual inform one another; how we write—and rewrite—history to fulfill our own needs; the danger of being consumed by the past; the burden of history, of secrets and silence; and the limits of knowledge and memory.

The writer and translator Miranda Richmond Mouillot lives in South of France since 2004 and speaks perfect French.