A bold and structurally ambitious new novel, both highly playful and deeply serious, by the critically-acclaimed author or A Tale for the Time Being.

THE BOOK OF FORM AND EMPTINESS
by Ruth Ozeki
Canongate, pub. date TBD 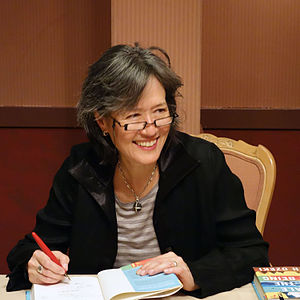 THE BOOK OF FORM AND EMPTINESS tells the story of a boy who begins to hear voices after his father’s tragic death. The voices belong to the objects in his house—a broken Christmas ornament, a piece of wilted lettuce, a sharpened pencil. Benny’s mother, struggling to support their household alone, develops a hoarding habit, driving Benny to seek refuge in the silence of a large public library, where objects speak in whispers. There, Benny meets a homeless poet, a beautiful young performance artist, and his very own Book—a talking thing—who narrates Benny’s story and teaches him how to listen.

From the editor : “Ruth’s abilities as a storyteller enable her to mesmerise the reader, and in the process of weaving this subtle and multi-layered tale, she takes us across time and place and covers such diverse subjects as racism, Walter Benjamin, snow globes, mental health, consumerism, Buddhism, bigotry, libraries, loss and grief.”

Ruth Ozeki is a novelist, filmmaker, and Zen Buddhist priest. She is the award-winning author of three novels, My Year of Meats, All Over Creation, and A Tale for the Time Being, which was shortlisted for the Booker Prize and the National Book Critics Circle Award. Her critically acclaimed independent films, including Halving the Bones, have been screened at Sundance and aired on PBS. She is affiliated with the Brooklyn Zen Center and the Everyday Zen Foundation. She lives in British Columbia and New York City.