An explosive and historic book of true crime and an emotionally powerful and revelatory memoir of a man whose ten-year search for his biological father leads to a chilling discovery: His father is one of the most notorious – and still at large – serial killers in America

THE MOST DANGEROUS ANIMAL OF ALL
Searching For My Father… and Finding The Zodiac Killer
by Gary L. Stewart
HarperCollins, May 2014

“I promise that you’ve never read anything like The Most Dangerous Animal of All. Mesmerizing from the first page, the story includes a shattering surprise that will sear itself in your memory. Be prepared to read non-stop; this really is a book you won’t be able to put down.”  — Jeff Guinn 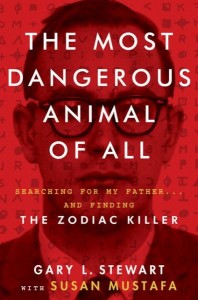 Soon after his birthmother contacted him for the first time at the age of thirty-nine, adoptee Gary L. Stewart decided to search for his biological father. His quest would lead him to a horrifying truth and force him to reconsider everything he thought he knew about himself and his world.
Written with award-winning author and journalist Susan Mustafa, THE MOST DANGEROUS ANIMAL OF ALL tells the story of Stewart’s decade-long hunt. While combing through government records and news reports and tracking down relatives and friends, Stewart turns up a host of clues—including forensic evidence—that conclusively identify his father as the Zodiac Killer, one of the most notorious and elusive serial murderers in history.
For decades, the Zodiac Killer has captivated America’s imagination. His ability to evade capture while taunting authorities made him infamous. The vicious specificity of his crimes terrified Californians before the Manson murders and after, and shocked a culture enamored with the ideals of the dawning Age of Aquarius. To this day, his ciphers have baffled detectives and amateur sleuths, and his identity remains one of the twentieth century’s great unsolved mysteries.
THE MOST DANGEROUS ANIMAL OF ALL reveals the name of the Zodiac for the very first time. Mustafa and Stewart construct a chilling psychological profile of Stewart’s father: as a boy with disturbing fixations, a frustrated intellectual with pretensions to high culture, and an inappropriate suitor and then jilted lover unable to process his rage. At last, all the questions that have surrounded the case for almost fifty years are answered in this riveting narrative. The result is a singular work of true crime at its finest—a compelling, unbelievable true story told with the pacing of a page-turning novel—as well as a sensational and powerful memoir.

*The bidding has started in Germany