When fearless and fun-loving Flora Bayano’s best friend Clara breaks the news that she’s moving, the girls set out to find Flora a new BFF, only to discover that replacing one friend with another is more complicated than it seems. 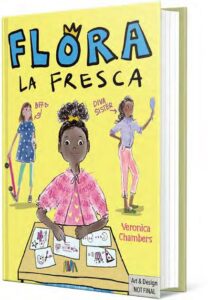 From New York Times bestselling author Veronica Chambers comes the first in a young middle-grade series about larger-than-life Flora Violeta LeFevre, who uses humor and a little mischief to navigate her best friend moving away, her sister’s overbearing and all-consuming quince preparations, and a surprising new friendship. In the end, Flora realizes that replacing one friend with another isn’t quite as simple as it seems.

Veronica Chambers is best known for her critically acclaimed memoir, Mama’s Girl. Most recently, she was the editor of The Meaning of Michelle: 16 Writers on the Iconic First Lady and How Her Journey Inspires Our Own, which Time magazine named one of the Top Ten Nonfiction Books of 2017. She has written more than a dozen books for young readers and cowritten New York Times bestselling memoirs with Robin Roberts, Eric Ripert, Senator Cory Booker, and many others. She has also been a senior editor at the New York Times Magazine, Newsweek, and Glamour.