A new nonfiction series from Amulet 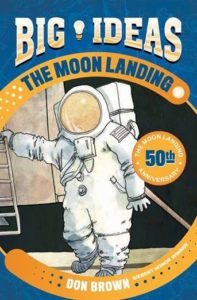 On July 20, 1969, Neil Armstrong took “one small step for man, one giant leap for mankind” when the Apollo 11 landed on the moon. But it wasn’t just one man who got us to the moon. The Moon Landing explores the people and technology that made the moon landing possible. Instead of examining one person’s life, it focuses on the moon landing itself, showing the events leading up to it and how it changed the world. The book takes readers through the history of rocket building: from ancient Chinese rockets, to “bombs bursting in air” during the War of 1812, to Russia’s Sputnik program, to the moon landing. Beautifully illustrated and well-researched, this book is the perfect resource for curious readers and tomorrow’s scientists. It includes a timeline of space travel, a bibliography, and an index.

Don Brown is the award-winning author and illustrator of many picture book biographies. School Library Journal has called him “a current pacesetter who has put the finishing touches on the standards for storyographies.” His books have been given a Sibert Award, an Orbis Pictus Award, named a Horn Book Best Book, and was an Eisner nominee, among other awards and notice. booksbybrown.com/about-don/