A queer graphic novel where the balls are fast, the smooches are spicy, and the girls . . . magical.

In this queer graphic novel that’s equal parts romance, softball, and magical girl drama, Mickey Monsoon and Astra Maxima are best friends . . . and maybe more. That is, until Astra unceremoniously dumps Mickey to become a softball wunderkind at a private girl’s school in Switzerland. Years later, Mickey is the hotshot pitcher for the Belle City Broads, and their team is poised to sweep the league this season. But Micky is thrown off their game when Astra shows up to catch for the Gaiety Gals, the Broads’ fiercest rival. Astra is flirty, arrogant, and reckless on the field—everything the rule-abiding Mickey hates.
Astra thinks Mickey’s cute and wants to fool around, even despite their rocky history and the trail of jilted softballers that Astra leaves in her wake. Too bad the only thing Mickey wants is vengeance for their broken heart and wounded pride! But even they have to admit—Astra is a certified babe. And that’s not all: Astra isn’t just a softball superstar, she’s a full-fledged magical girl.
The only way for Mickey to defeat Astra is to betray the Broads and join the Danger Dames, a secret elite team, and start dating Astra’s ex! OK, that last bit wasn’t part of the plan . . . Mickey’s rapidly getting in too deep, but is she just in trouble or is she actually in love? Full of wet mitts, hard hits, and a bevy of softball-playing babes, Grand Slam Romance: Book 1 is a flawless home run that is sure to knock readers out of the park.

Ollie Hicks is a Black British comics creator and editor who lives in the UK and has Jamaican heritage. They have a PhD in comics studies—focused on 20th-century British and American girls’ comics—from the University of Dundee, which is gently gathering dust. They like to write funny gay stories with their funny gay wife, Emma Oosterhous. Grand Slam Romance is their debut graphic novel.
Emma Oosterhous is a cartoonist, animal enthusiast, and lesbian from Colorado. In 2018, she earned a Marshall Scholarship and then an MDes in comics and graphic novels from the University of Dundee. She now lives in the UK, where she makes comics with her wife, Ollie Hicks. Grand Slam Romance is her debut graphic novel

What happens when a couple of prehistoric creatures want to become internet stars? Trilobite and Amber (a walking whale) dream of fame and fortune. They don’t realize that most of the world thinks that they’re extinct. When a wandering paleo-newscaster introduces them to the world of internet videos, they hop at the chance to get behind the camera. The competition for internet fame will be fierce—Trilobite and Amber will face off against ancient sea creatures, talking cacti, floating cat heads, and more! Friendships will be tested, allies will be made, and cameras will be smashed! Our heroes will have to use all of their newfound skills when they find themselves competing in an all out video-making battle royale!
With laugh-out-loud gags and outrageous, elaborate artwork, fans of Dog Man and InvestiGators have never seen anything like Nathan Hale’s THE MIGHTY BITE!

Nathan Hale is the #1 New York Times bestselling author and illustrator of the Nathan Hale’s Hazardous Tales series. He also wrote and illustrated the graphic novels One Trick Pony and Apocalypse Taco. He lives in Utah.

A new graphic novel series for emerging readers about accepting yourself and others, from up-and-coming author-illustrator Meggie Ramm.

Batcat loves being all alone in their home on Spooky Island. Up in their tree house, they pass the time playing video games and watching TV. But when Batcat suddenly finds themself haunted by an annoying, ice cream–stealing ghost, they visit the local Island Witch for a spell to remove their ghastly guest permanently!
With their Ghost-B-Gone spell in hand, Batcat travels across Spooky Island to gather ingredients—to the Cavernous Caves where the bats tell them they’re too round to be a bat, and to the Whispering Cemetery where the cats will help only if they commit to being a true cat. But Batcat is neither and that’s what makes them special, right?
From up-and-coming author Meggie Ramm comes a sweet and fun story about accepting yourself when you’re perfectly in-between here and there.

Meggie Ramm is a non-binary cartoonist from Michigan. They spent their twenties teaching comics to kids in Oakland, California, and it was the best job in the whole world. They’ve had work in the New Yorker, Everyday Feminism, and Silver Sprocket, and have a limerick-based comic strip called The Littlest Dungeon Guard distributed through Sunday HaHa. They love rhymes, reading gay sci-fi and fantasy, and comics.

A snake, an octopus and the near death of Johnny Ramone. The almost true account of the 1977 New York City blackout. 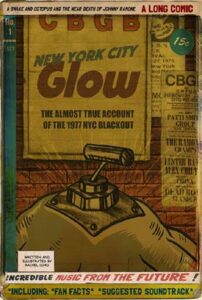 Set in the 1970s, the story’s capstone is the 1977 New York City blackout. Ray the snake is a sad, lonely, middle aged insurance salesman from Midway Kentucky, looking for a better life. Strawberry is a Glow Octopus (Stauroteuthis syrtensis) with an inability to control her glow. Strawberry finds herself in constant trouble; she has a prison record and an FBI file to prove it.
The unlikely pair embark on a road trip to New York City, where they rub shoulders with rock royalty, things get electric – in more ways than one.
A tribute to all kinds of music, from elevator to opera.

In a painting career spanning 20 years, Rachel Coad has exhibited in both Australia and the UK. In 2016 she was awarded The Lester Prize for portraiture. A former newspaper artist and designer, this is Rachel’s first graphic novel. Or as she likes to call it: ‘A long comic’.

Two different format of companion books for fans of the Destiny video game by Bungie, a game development studio that created some of the most celebrated video game franchises, including Marathon, Myth, Halo, and Destiny.

DESTINY GRIMOIRES VOLUMES I-IV (published 2018 – 2021):
Bungie presents the Destiny Grimoire Anthology, a must-have collectible lore compendium designed and assembled for Destiny’s devoted and enlightened scholars and lore lovers, as well as fans of fantasy and science fiction storytelling. The DESTINY GRIMOIRE ANTHOLOGY weaves tales from multiple sources together for the first time, casting new light on Destiny’s most legendary heroes, infamous villains, and their greatest moments of triumph and tragedy. Until now, the myths, mysteries, and machinations of the Destiny universe were found hidden throughout the worlds – enticing threads that hinted at a greater tapestry.
Each unique volume intends to illuminate a facet of the world, and the complete anthology will confirm and challenge players’ thoughts and assumptions on what it means to be a Guardian (players), offering new and differing perspectives on the cosmic war that rages between the Traveler and its ancient enemies.

THE DESTINY COMIC COLLECTION VOL. ONE (July 2019):
An essential collection of comic stories for Destiny fans. This 144-page volume includes Bungie’s comic collection plus never before seen stories, behind the scenes galleries, and exclusive content from featured artists! From Osiris’s exile to Ana Bray’s homecoming on Mars, uncover the legends behind Destiny 2’s iconic characters. Featuring stories written and illustrated in collaboration with Bungie by Ryan North (Dinosaur Comics, Marvel’s The Unbeatable Squirrel Girl), Kris Anka (Marvel’s X-Men and Star-Lord), Mark Waid (DC Comics’ The Flash and Marvel’s Captain America) plus a special introduction by Gerry Duggan (Marvel’s Deadpool). Includes one of two collectible bookmarks printed with the Destiny 2 « Heroes of the Light » emblem code inserted inside the book.

Bungie, Inc. is an American video game developer based in Bellevue, Washington. Established in 1991, they have developed the hit games, Destiny, Halo, Myth, and Destiny.