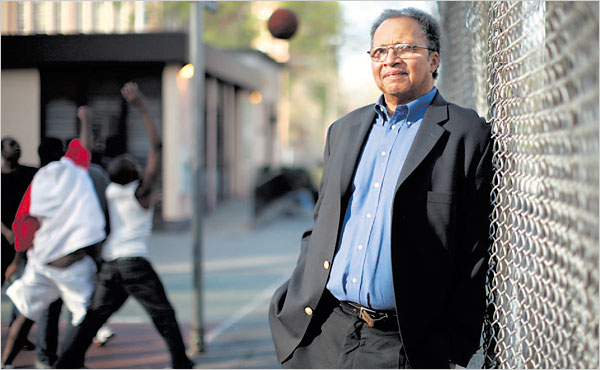 Photo from a story on Myers featured in The New York Times.

Walter Dean Myers’s fiction and nonfiction books have reached millions of young people. A prolific author of more than one hundred titles, he received every major award in the field of children’s literature. He wrote two Newbery Honor Books, eleven Coretta Scott King Award winners, three National Book Award finalists, and was the winner of the first Michael L. Printz Award for Excellence in Young Adult Literature. He also received the Margaret A. Edwards Award for lifetime achievement in writing for young adults and was the first recipient of the Coretta Scott King-Virginia Hamilton Award for Lifetime Achievement. From 2012 through 2013, he served as the National Ambassador for Young People’s Literature with the platform « Reading is not optional. » The story of Steve Harmon, a teenage boy in juvenile detention and on trial. Presented as a screenplay of Steve’s own imagination, and peppered with journal entries, the book shows how one single decision can change our whole lives.

Sometimes I feel like I have walked into the middle of a movie. Maybe I can make my own movie. The film will be the story of my life. No, not my life, but of this experience. I’ll call it what the lady prosecutor called me … Monster.