The beloved creator of Blues Clues and Daniel Tiger’s Neighborhood and protégé of Fred Rogers explores the importance of kindness and how it can change your life in this essential guide and tie-in to the PBS special, “The Power of Radical Kindness” 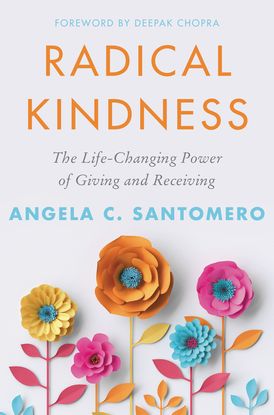 Angela C. Santomero, the creator, executive producer, and head writer of many of today’s most popular educational children’s shows believes in the radical power of kindness, on her shows, and in her life. Inspired by her mentor Fred Rogers, beloved host of the classic, award-winning PBS show Mister Rogers’ Neighborhood, Angela has dedicated her life to teaching others that when you treat yourself and others with warmth, empathy, and respect, life changing benefits follows.  From the true meaning of self-care and the gift of vulnerability, to the importance of active listening or the magic of asking for help, Radical Kindness goes beyond The Golden Rule and entreaties to “be nice,” contending that kindness is the key to recognizing others, and ourselves, as worthy of love and understanding. Much like gratitude, Angela contends we need a kindness practice. A practice in which we learn to see with our hearts and act from a place of compassion. As the Dalai Lama says, “Be kind whenever possible. It is always possible.” Through practicing radical kindness—toward ourselves, with loved ones, and to the world at large—we can transform ourselves, our neighborhood, and our world for the better.

Angela C. Santomero is the Co-Creator, Executive Producer and Head Writer for the breakthrough and award-winning Blue’s Clues. Malcolm Gladwell referred to Blue’s Clues as « One of the stickiest TV shows EVER made » in his book The Tipping Point. Angela is also the Creator, Executive Producer and Head Writer for the smash hit Daniel Tiger’s Neighborhood (PBS), as well as Super Why! (PBS), Creative Galaxy (Amazon Studios), and Wishenpoof! (Amazon Studios). Angela is a Founding Partner at Out of the Blue Enterprises in NYC. Described by Joanne Rogers as “a modern day Fred Rogers,” and by Fatherly.com as “the driving force behind the best educational programming for children,” Angela’s work has awarded her with a prestigious Peabody award, two TCA awards, 25+ Emmy nominations, and numerous Parents Choice Gold and Silver Awards. Angela’s legacy is forever changing the way in which preschoolers watch television by presenting them with unique, challenging programs that enable them to learn through play, humor, and respect – – changing the world one preschooler at a time! Angela blogs on AngelasClues.com and her first parenting book, Preschool Clues – Raising Smart, Inspired and Engaged Kids in a Screen-Filled World has debuted with Touchstone/Simon and Schuster.