The Pisces by way of Emily St. John Mandel or Karen Russell meets The Snow Child and The Need, AMERICAN MERMAID is by turns both a comic and fabulously insightful tale of two female characters in search of truth, love and self-acceptance as they move between worlds without giving up their voices. 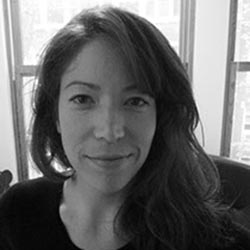 Penelope Schleeman, a consistently broke Connecticut high school teacher, is as surprised as anyone when her sensitive debut novel, American Mermaid—the story of a wheelchair-bound scientist named Sylvia who discovers that her withered legs are the vestiges of a powerful tail—becomes a bestseller. Penelope soon finds herself lured to LA by promises of easy money to co-write the American Mermaid screenplay for a major studio with a pair of male hacks. As the studio pressures Penelope to change American Mermaid from the story of a fierce, androgynous eco-warrior to a teen sex object in a clam bra, strange things start to happen. Threats appear in the screenplay draft; siren calls lure people into danger. When Penelope’s screenwriting partners try to kill Sylvia off entirely in a bitterly false but cinematic end, matters off the page escalate. Is Penelope losing her mind, or has her mermaid come to life, enacting revenge for Hollywood’s violations?

Julia Langbein (BA, Columbia University, 2003; PhD, University of Chicago, 2013) held a postdoctoral fellowship in Art History at Oxford University from 2014-2018 and is currently a research fellow at Trinity College Dublin, where she is writing a book about how generational conflict and changing ideas of old age have shaped modern art. Her monograph, Laugh Lines: Caricaturing Painting in Nineteenth-Century France, which brings to light a brilliant subculture of comic criticism and argues for its importance in the development of modernist painting, will be published in March 2022 by Bloomsbury Visual Art and has received outstanding advance praise from senior scholars (“impeccably researched,” “engaging,” “essential”). Langbein, a sketch and standup comedian for many years, was the author of the viral comedy blog The Bruni Digest (2003-2007), which reviewed New York Times critic Frank Bruni’s restaurant reviews every week. She has since written about food, art and travel for Gourmet, Eater, Salon, Frieze and other publications.