In the vein of Jane Austen and Candice Carty-Williams, a debut novel about a Trinidadian woman who finds herself assisting a legendary makeup artist. 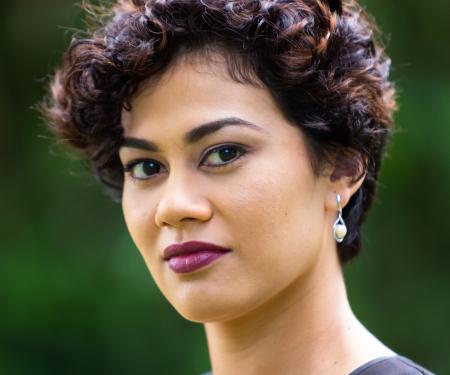 Bianca Bridge is at her wit’s end. Fired from her editorial job after scandalizing Trinidad’s tight, conservative society with an affair with a married government minister, she’s resorting to modeling for even the sleaziest of photographers to make ends meet. Her mother, were she still alive, would be stunned by whom her daughter has become. Her father — and his ample checkbook — is off somewhere with his second family. And the government minister? It was her precious Eric Hugo’s wife who got her fired. With nothing left to lose, Bianca agrees to assist the brilliant but aloof makeup artist Obadiah Cortland. A legend in the Trinidadian beauty community, Obadiah’s makeup-school-cum-beauty-salon, OC Beauty, complete even with its own magazine, is snobbishly exclusive. At least Bianca will get to write. Yet Obadiah is not the elite tyrant he seems. Born in the poorest part of Trinidad, he’s clawed part-way up society’s ladder and built OC Beauty around his meticulously crafted persona. He’s not about to let anyone see past his façade, especially not the headstrong ‘Miss Bridge.’ Still, Bianca and Obadiah work diligently, along with co-workers Radhika and Dante, while Trinidadian high society throws obstacles in their path. When Bianca discovers Obadiah’s unexpected connection to her former lover, however, and the power Eric Hugo is continuing to attempt to wield over her and the OC Beauty community she’s come to love, she’s finally ready to fight back like her mother taught her — and to reconsider, at last, the nature of what might deserve to be called beautiful.
Inspired by the spirit of writers ranging from Jane Austen to Candice Carty-Williams, yet a talent unto herself, Commonwealth Short Story Prize finalist and Trinidadian writer Breanne Mc Ivor’s debut novel THE GOD OF GOOD LOOKS alternates between Bianca’s irreverent, yet poignant diary entries and Obadiah’s clear-eyed first person narrative as it captures, with warmth, bite, and vulnerability, the fraught impact of the commodification of beauty in a patriarchal society, the Caribbean’s rigid class barriers, and the sweet ache of two young people seeking to find their voice. Though focused on the everyday realities of modern Trinidad and Tobago, THE GOD OF GOOD LOOKS, in addition to being transportive, is full of meaty questions that are universally relatable.

Breanne Mc Ivor’s writing has been shortlisted for the Commonwealth Short Story Prize, the Glimmer Train Fiction Open, the BCLF Elizabeth Nunez Award for Writers in the Caribbean, and the Derek Walcott Writing Prize. In 2015, she was awarded The Caribbean Writer’s David Hough Literary Prize. In 2020 and 2021, she was one of twenty-five Caribbean authors and bookstagrammers involved in the #ReadCaribbean initiative, which encouraged more people to read Caribbean literature. Her short story collection, Where There Are Monsters, was published in 2019 by a small British house, Peepal Tree Press, “home to the best in Caribbean and Black British fiction.” Mc Ivor holds degrees in English from the universities of Cambridge and Edinburgh and has a certificate in Advanced Professional Makeup Artistry from the Ephraim Hunte International Makeup Academy. She lives in West Trinidad.