THIS TRAIN IS BEING HELD
by Ismee Williams
Amulet, Publication février 2020 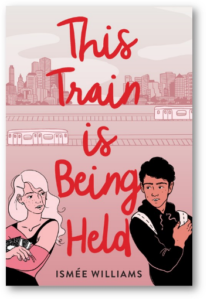 When private school student Isabelle Warren first meets Dominican-American Alex Rosario on the 1 train, she remembers his green eyes and gentlemanly behavior. He remembers her long ballet dancer’s legs and untroubled happiness, something he feels belongs to all rich kids. As the two grow closer in and out of the subway, Isabelle learns of Alex’s father, who is hell-bent on Alex being a contender for the major leagues despite Alex’s desire to go to college and become a poet. Alex learns about Isabelle’s Havana-born mother, Eliza, a woman with a prejudice against Latino men, who pressures her daughter to stay away from him. When Isabelle’s father loses his job and her older brother struggles with his mental health, her relationship with Alex falters. But fate—and the 1 train—throw them together when Isabelle needs him the most.
Ismée Williams is a pediatric cardiologist by day and an accomplished author by night. Her first book with Abrams, Water in May, was released in 2017 to critical acclaim. She lives in New York City.