THE HOUSE GUEST
by Hank Phillippi Ryan
Forge/Macmillan, February 2023
(via DeFiore and Company)

After every divorce, one spouse gets all the friends. What does the other one get? If they’re smart, they get the benefits. Alyssa Macallan is terrified when she’s dumped by her wealthy and powerful husband. With a devastating divorce looming, she begins to suspect her toxic and manipulative soon-to-be-ex is scheming to ruin her — leaving her alone and penniless. And when the FBI shows up at her door, Alyssa nows she really needs a friend.
And then she gets one. A seductive new friend, one who’s running from a dangerous relationship of her own. Alyssa offers Bree Lorrance the safety of her guest house, and the two become confidantes. Then — Bree makes a heart-stoppingly tempting offer. Maybe Alyssa and Bree can solve each others’ problems.
But no one is what they seem. And the fates and fortunes of these two women twist and turn until the shocking truth emerges: You can’t always get what you want. But sometimes you get what you deserve.

Hank Phillippi Ryan has won five Agatha Awards in addition to Anthony, Macavity, Daphne du Maurier, and Mary Higgins Clark Awards. As on-air investigative reporter for Boston’s WHDH-TV, she’s won 37 Emmys and many more journalism honors. A past president of National Sisters in Crime and a founder of MWA University, Ryan lives in Boston with her husband.

In one of the year’s most anticipated thrillers #1 New York Times bestseller Sarah Pekkanen calls « Alex Finlay’s best yet, » WHAT HAVE WE DONE is a tale about the lives we leave behind and the secrets we carry with us forever.

WHAT HAVE WE DONE
by Alex Finlay
Minotaur Books, March 2023
(via Aaron Priest Literary)

A stay-at-home mom with a past. A has-been rock star with a habit. A reality TV producer with a debt. Three disparate lives. One deadly secret.
Twenty five years ago, Jenna, Donnie, and Nico were the best of friends, having forged a bond through the abuse and neglect they endured as residents of Savior House, a group home for parentless teens. When the home was shut down―after the disappearance of several kids―the three were split up.
Though the trauma of their childhood has never left them, each went on to live accomplished―if troubled―lives. They haven’t seen one another since they were teens but now are reunited for a single haunting reason: someone is trying to kill them.
To survive, the group will have to revisit the nightmares of their childhoods and confront their shared past―a past that holds the secret to why someone wants them dead.
It’s a reunion none of them asked for . . . or wanted. But it may be the only way to save all their lives.
WHAT HAVE WE DONE is both an edge-of-your seat thriller and a gut-wrenching coming-of-age story. And it cements Alex Finlay as one of the new leading voices in thrillers today.

“This is the very best kind of thriller: fast, smart, and not a wasted word. Alex Finlay is a master at making the pages fly past.”―James Kestrel, Edgar-award winning author of Five Decembers

Alex Finlay lives in Washington, D.C. and is the author of critically-acclaimed novels, including the 2021 breakout, Every Last Fear. His work has appeared on numerous best-of-the-year lists, been published in seventeen languages around the world, and is currently in development for a major television limited series.

Utterly original and wildly entertaining, with a protagonist whose life is a total mess, KILLING ME is the laugh-out-loud funny thriller that we never knew we needed.

KILLING ME
by Michelle Gagnon
Putnam, May 2023
(via Levine Greenberg Rostan Literary) 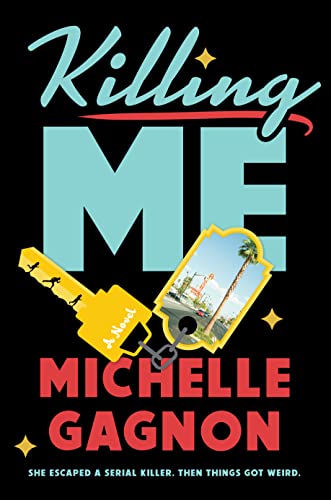 She escaped a serial killer. Then things got weird. Amber Jamison cannot believe she’s about to become the latest victim of a serial killer—she’s savvy and street smart, so when she gets pushed into, of all things, a white windowless van, she’s more angry than afraid. Things get even weirder when she’s miraculously saved by a mysterious woman…who promptly disappears. Who was she? And why is she hunting serial killers?
You’d think escaping one psychopath would be enough, but Amber’s problems are just beginning. Her close call has law enforcement circling a past she’s tried to outrun. So she flees across the country, ending up at a seedy motel in Las Vegas with a noir-obsessed manager and a sex worker as her unlikely companions…and danger right behind. She’s landed in the crosshairs of the world’s most prolific killer, caught up in a deadly game that’s been going on for years. To survive, she’s forced to dust off her old playbook and partner with someone she can’t trust. The odds are against her, but sometimes you just have to roll the dice.

Michelle Gagnon writes thrillers for teens and adults. A former modern dancer, dog walker, bartender, freelance journalist, personal trainer, and model, she’s currently pursuing a master’s degree in clinical psychology. She lives in Los Angeles with her family and way too many dogs.

A debut mystery with slight speculative elements, which follows an actress turned psychic who finds herself embroiled in a murder investigation when the doppelgänger she never knew existed turns up missing.

When Jenny St. John was eighteen, she moved to Los Angeles from her rural Iowa hometown and scored the lead role in an independent film called The Divide. She was working with the young auteur director Serge Grumet and on her way to becoming the next indie darling. But when the movie tanked and Jenny never caught a second break it seemed her charmed story had a different ending in mind. Now, two decades later, after floundering on the fringes of the entertainment industry, she’s barely keeping afloat running a low-level grift as a psychic life coach.
But when news surfaces that Serge has been murdered, Jenny’s life is turned upside down. Unbeknownst to Jenny, Serge’s ex-wife, painter Genevieve Santos, looks alarmingly similar to Jenny. So much so, that when Gena goes missing, the cops think Jenny is Gena.
Jenny finds herself pulled into Gena’s world and manages to somehow leverage both her resemblance to Gena and her ersatz psychic abilities to infiltrate the affluent yet unstable inner circle of friends, which include a Korean pop idol-turned-social media star and an Oscar-winning actress-turned-wellness guru. It becomes clear that Gena is either the culprit of Serge’s murder or another victim. Soon Jenny’s search to find Gena unearths dark secrets about her own past while putting her squarely in the sights of a killer.
THE DIVIDE is a propulsive, unputdownable novel full of sharp insights on identity, age, success, and the inescapable pitfalls of fractured memory.

Morgan Richter is a graduate of the Filmic Writing program at the University of Southern California’s film school and has worked in production on several television shows including ABC’s America’s Funniest Home Videos and E! Entertainment Television’s Emmy-winning comedy series Talk Soup. An avid popular culture critic, she is the author of Duranalysis: Essays on the Duran Duran Experience and has amassed a cult following on her analyses of classic Duran Duran videos. She has self-published five novels but THE DIVIDE is her first foray into traditional publishing. Morgan currently lives in Seattle.