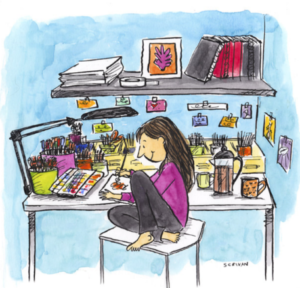 In the spirit of The Dork Diaries and the work of Raina Telgemeier comes a hilarious new illustrated middle grade series about self-confidence and hidden talents.
Natalie has never felt that she’s enough—athletic enough, stylish enough, or talented enough. And on the first day of middle school, Natalie discovers that things are worse than she thought—now she’s not even cool enough for her best friend, Lily! As Natalie tries to get her best friend back, she learns more about her true self and natural talents. If Natalie can focus on who she is rather than who she isn’t, then she just might realize she’s more than enough, just the way she is. Written and illustrated in the form of Nat’s sketchbook, NAT ENOUGH is a story about the power of self-love and acceptance, told with warmth and humor.
Maria Scrivan’s cartoons have been published in magazines, newspapers, books, and on national television.