A rollicking vampire-filled graphic novel heist that will keep you guessing until the very end for fans of Bram Stoker’s Dracula and Ocean’s Eleven, from award-nominated animator and comic book creator Stephan Franck. 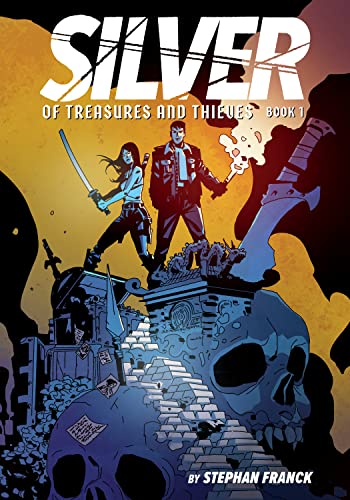 There are only two kinds of objects in this world. The ones that shine and the ones that don’t.
SILVER’s protagonist, James Finnigan, only concerns himself with objects from the first category. Those objects don’t hide in plain sight. They hide in dark places.
When Finnigan loses his grifter gang’s lifetime fortune in a heist gone wrong, he stumbles on a consolation prize in the crypt of the Harker Foundation—a notebook that tells of an ancient, immeasurable treasure, accompanied by a bar of pure silver to prove it. It’s a tall tale, but also Finnigan’s only lead. In an effort to make up for what he’s lost, he mounts the heist of the millennium in search of the Silver Dragon. Just one catch: The famed treasure is said to be hidden in a castle full of vampires.
Set in the noir-pulp era of the 1930s, award-nominated animator Stephan Franck’s Silver is a rip-roaring, genre-bending graphic novel that draws on the best of gothic horror and heist tropes to tell a story that is pure adventure. Silver offers the captivating dynamics of an ensemble cast of misfits, while inviting us to accept that Bram Stoker’s Dracula was a tale of fact, not fiction. The result is a smart, innovative story complete with world-class visuals and sharply drawn characters that’s equal parts action, humor, and heart.

Stephan Franck is an animator/writer/director/comic book creator. He was a supervising animator on the cult classic The Iron Giant and contributed story to Despicable Me. He cocreated the animated TV series Corneil & Bernie (Nicktoons-Hub Network), received an Annie Award nomination for Best Director in a TV Program for Smurfs: The Legend of Smurfy Hollow, and supervised the animation of Marvel Studios’ What If…?. He lives in Los Angeles.