Sara Livingstone’s school trip to the Beijing Palace Museum takes a terrifying turn when an encounter with the ancient Qingming Scroll thrusts her a thousand years into China’s past. With secrets in the shadows and danger around every corner, Sara relies on her wits and her Granny Tang’s stories to survive. As dark forces gather, she must take her place in a cosmic battle and find the courage to face an unworldly ancient magic. 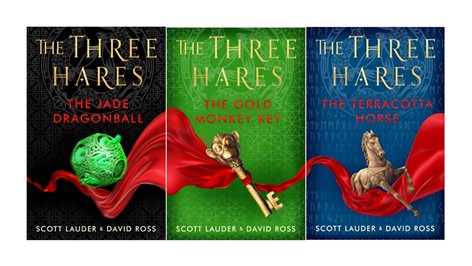 Meet Sara Livingstone. A normal schoolgirl in Beijing who enjoys playing the clarinet and learning new words of the day like ‘sepulchral’ and ‘debacle’. Yes, totally normal… Except from when she’s starting to experience disturbing hallucinations when she sees pictures of a strange-looking man in the newspaper. And not just any strange-looking man, either… Specifically, the 17 year-old CEO of a big mining corporation based up in Northern China, carrying out illegal genetic testing in China and mining a rare mineral near the ecologically fragile beaches of San Salvador. The hallucinations are one thing – she can try to ignore them, kind of – but when she studies the Qingming scroll with her class on a field trip, and accidentally time travels to medieval China, she can’t ignore what’s happening to her any longer. Whether she wants to or not, Sara is being called by The Immortals to help them defeat an ancient and vengeful plot that threatens an end to humanity. As if that wasn’t hard enough, she has to find her two counterparts in this challenge, whoever and wherever they might be. It seems this mission is rather urgent.

Sanjeev’s dog Jigsaw is missing in the middle of winter in New Jersey. But this tragedy is dwarfed by what happens to him in the Metropolitan Museum of Art. Has he really entered the 6th Century and become the slave to monks traveling the Silk Road to Byzantium – and might they just be murderers? Trouble is, even if he figures out how to get out of this, he’s got other problems: someone, or something, is coming after him. Part of the answer might be Sara, a girl who contacts him on the net and keeps talking about the Immortals. But who or what are The Three Hares and how can they stop the darkness about to engulf the world?

Salma Mansour is a black belt in taekwondo, a skill she will need to stay alive. One second, she’s in the British Museum, the next a thousand years away in a battle between the Saxons and Vikings. And she’s supposed to help? Things momentarily brighten when she encounters Sara and Sanjeev, who seem to understand. They don’t have much time to plan though; without warning, all three are transported to Xi’an, stronghold of Chan, a wealthy gang leader bent on immortality. Chan has kidnapped world famous geneticist Lin Dan and assembled fragments of an ancient magic. Chan will stop at nothing to fulfil his dream… even if it means releasing forces far beyond his control. The Three Hares must work together to defeat Chan and the power that controls him … or else.

Scott Lauder was born in Ayrshire, Scotland. Having taught in Greece, Japan, and England, he now lives with his wife and four cats in the UAE where he teaches English. His other books include The Right Thing, A Single Shot, and The Boy-King Tutankhamun.
David Scott Ross has traveled and taught throughout Asia since he first moved there in 1987. He currently teaches in upstate NY, where he lives with his wife and two sons. He is writing two other novels.
The authors met as English teachers in Japan. It’s through their shared love of languages, travel and world cultures that the idea for this global and mythological YA trilogy was born. Read more about them in a recent interview here.