For fans of Twenties and Fleabag TV shows and Sally Rooney’s Normal People, this is a truly modern portrait of millennial life. 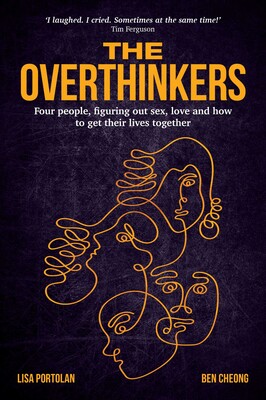 A powerful, heart-warming novel sharing the embarrassments and excitements, horrors and humiliations, glories and defeats of a group of twenty-something year-olds, navigating life, love, sex and their dreams. Trying to appear ordinary on the outside but inside obsessing on the unspoken rules of what’s okay and racked with self-doubt.

Leo: the confident ‘Gay-sian’ – fit, fabulous and hilarious – but riddled by anxieties and seeing an unavailable married man.
Benji: a privileged pretty-boy who spends his time pining after Leo’s gorgeous house-mate Francesca, who barely notices that he’s alive.
Francesca: a social climber plotting her remarkable and glamorous future, aligning herself to well-connected but lost Hamish.
Hamish: an Eastern-suburbs private school boy dealing drugs to distinguish himself, and now he’s met a girl he really likes (who is not Francesca).

Who will they be on the other side? Will they be friends, enemies or strangers?

Lisa Portolan is a journalist and author from Sydney. She has previously published two books, including bestseller, Happy As (Echo, Melbourne). She has written for publications like the Australian Financial Review, The Guardian, 9 Honey and 10 Daily, and appeared on the Today Show and The Drum.
Ben Cheong is a PR consultant and accidental first-time author of THE OVERTHINKERS. An openly-gay, cis man, and son of first-generation Chinese Malay immigrants, Ben grew up in suburbia as an outlier in both the ‘Aussie’ and Chinese communities. Instead, Ben attempted to make connections in a very closeted, young LGBT+ community. As a young adult, Ben felt embarrassed when talking about mental health issues, and heard similar stories from his close friends, which drove him to write his debut novel with Lisa Portolan.