A debut middle-grade novel about a girl convinced she’s possessed by a demon who finds herself apprenticing in the kitchen of an elite magic school, only to discover a shocking secret that will upend her destiny—and potentially lead to her kingdom’s ruin. Irresistibly funny, imaginative, and full of heart – this debut has everything that makes middle-grade great! 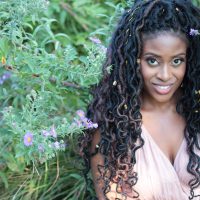 Life in the Swamplands is tough for twelve-year-old orphan Adia. Her family thinks she’s a nuisance, the missionaries make daily life a misery, and the neighbors all believe her to be an ogbanje, a demon-possessed child thought to bring misfortune wherever they go. Adia can’t disagree: she blames herself for the death of her cousin EJ, and when she manifests mysterious, uncontrollable powers, she has to face the possibility that there might be something wicked within her.
When an offer for a kitchen apprenticeship at the faraway Academy of Shamans arrives on the same day she nearly flattens her whole town by accident, Adia seizes the opportunity to flee, with nothing but a small pouch of change, her cat Bubbles, and the hope that she’ll find someone at the school who can help figure out what is wrong with her—and fix it. But at the Academy , Adia stumbles upon a shocking secret. Darian, the ruthless emperor of Zaria, really is possessed, and by a demon said to be more wicked than any other: the mythical Olark. And he’s on the way to the school—for what purpose, no one knows.
Joining forces with a snarky Goddess, a knife-wielding 500-year-old girl, and a status-obsessed soldier boy, Adia goes on a mission through hidden realms to exorcise Olark from Darian, save her kingdom, and herself. But if she is to succeed, she will have to understand the mysterious powers that dwell inside her…and learn who she really is. Whatever choices Adia makes, the fate of the world hangs in the balance.
Bursting with imagination, heart, and humor, CHILDREN WHO COME AND GO is the type of immersive, action-packed adventure that readers of all ages will want to return to again and again, perfect for fans of magic school stories like SCHOOL FOR GOOD AND EVIL and fast-paced fantasy such as ARU SHAH AND THE END OF TIME. It’s an unputdownable story about carving your own path out in the world, and introduces Isi Hendrix as an exciting new talent in the middle-grade space.

Isi Hendrix is a Pitch Wars 2020 mentee and an Avengers of Color 2020 mentee. She has degrees in anthropology and psychology from USC and has spent many years living in the Amazon and Gabonese rainforests working with shamanic tribes. She is a Black feminist, avid gardener, and, to the horror of her goat meat-loving Nigerian mother, a vegan since kindergarten.