A major middle-grade graphic novel series that follows the adventures of an ordinary kid in a world where superheroes are common, who has to call upon his power of common sense to save the day when the rest of the school becomes obsessed with a game that might be more sinister than it first appears. 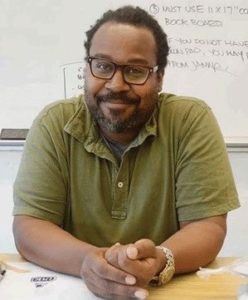 In Leon’s world, superheroes are common as teachers or dentists—at Leon’s school, they come to Career Day alongside comic book artists and chefs! But being a superhero is anything but ordinary for kids like Leon, without powers. Surprise ambushes from villains can ruin a school trip, and superhero kids have a pretty unfair advantage in gym class. Though Leon’s keen common sense is practically a power unto itself, it’s not always effective against super-bullies… Until kids at school suddenly become obsessed with a new game. Even some of the super-kids seem trapped by flashing lights on their phone. As Leon swings into action, figuring out what’s taking over the school and his town, his common sense – and a few secrets he’ll discover hiding in plain sight – may become more powerful than he ever imagined.

Jamar Nicholas is an award-winning artist and educator, who dedicates his career to helping young people realize the power of visual narrative. Jamar aims to bring awareness to anti-bullying, healing, and positive images of people of color with the idea that everyone can be a hero. He is a columnist for DRAW! and hosts the Pencil To Pencil Podcast with industry legends Mike Manley and Bret Blevins.