A beautifully rendered portrait of love, healing, and long-buried pain, digging deep into the nature of trauma and class division. Perfect for readers of Eleanor Oliphant is Completely Fine by Gail Honeyman, The God of Small Things by Arundhati Roy, and The Island of Missing Trees by Elif Shafak.

THE IDLE STANCE OF THE TIPPLER PIGEON
by Safinah Danish Elahi
Neem Tree Press, May 2023
(via Randle Editorial & Literary) 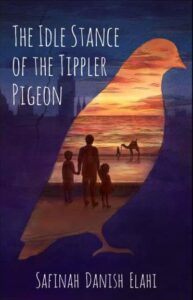 Zohaib, Misha and Nadia believed they would be in each other’s lives forever. As children they played, argued, teased and loved one another. Yet nothing could have prepared them for the tragic turn of events one fateful afternoon in Karachi, Pakistan, when the divisions and differences between them are revealed.
Years later and they are still trying to piece their lives back together, still trying to make sense of what happened. Zohaib is living in London, haunted by the ghosts of the past. Nadia has escaped the household where she first met Misha and Zohaib but finds fate delivering her back to their door…

Safinah Danish Elahi is a lawyer, writer and poet. She is the author of two books, The Unbridled Romance of Love and Pain and Eye on the Prize, a novel which is being adapted for tv. Safinah is also the founder of Reverie Publishers, an independent press based in Pakistan. Recently, she was selected for the Iowa Writing Program Fall Residency 2022.