Black Swan meets The Devil Wears Prada in this creepy horror about fashion, about sexuality as a commodity, and the power wielded by men trying to harness it. 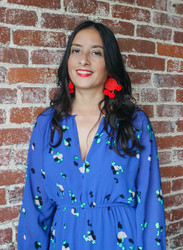 After the death of her grandmother, Samara Martín leaves her overbearing Cuban family behind in New Jersey for a job at a once-edgy fashion brand in Vernon, California. Touted as up-and-coming, Vernon turns out to be eerily desolate, made worse by the foul-smelling slaughterhouse near the office.
Trying to navigate office politics by appeasing her volatile boss, Samara throws all her focus into an upcoming runway show. But there are other forces at play; she finds names stitched into garments in the archive that disappear the next day, she starts having visions of a young girl that grow increasingly disturbing—and there’s Brandon Hernandez Murphy, a charming tech investor keen on reinventing Vernon who Samara finds herself drawn to.
Samara starts to hide her increasing instability by drinking more, casting aside her family’s warnings, but when the runway show is a success, the guardrails come off entirely. The afterparty is extreme in all senses: beauty, drugs, and sex—and Samara succumbs to every vice. But her visions aren’t through with her yet. They lead her to a disturbing discovery and a violent confrontation with consequences for both Samara’s world, and the world of the supernatural.

Lilliam Rivera draws upon her experiences as a founding editor of Latina magazine to examine the dark side of glamour and deliver a haunting story. She is also an award-winning writer and author of numerous young adult novels, including The Education of Margot Sanchez, We Light Up the Sky, Never Look Back, and Dealing In Dreams. She is also author of the middle grade Goldie Vance books. Her work has appeared in The Washington Post, The New York Times, and Elle, to name a few. Lilliam lives in Los Angeles.