Dealing with themes around identity and belonging, and with the political backdrop of the collapse of the British high street and the rise of populist politics, this is a novel at once beautifully evocative and deeply thought-provoking, by a hugely talented new voice. 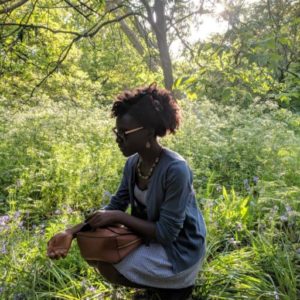 The high street is dying, and with it, Rupert’s shop ‘the Chest of Small Wonders’, which he has run for decades. Most people won’t miss it. But for teenager Kwasi, the Chest is a refuge he can’t live without, where he finds respite from school bullies and his inescapable aunties (who may or may not have overstayed their visas) at home. Rupert is a man whose home feels too empty: he has lost his way since the death of his wife, trying to remain in the happiness they shared by retreating into a world of drugs. An unlikely friendship develops between Rupert and Kwasi, a relationship which changes over time as well as changes them. But as politics engulfs the shop, both face difficult choices that will force them to confront their prejudices.

Sussie Anie lives in London, where she was born and grew up. After graduating with a BA in Philosophy, Politics and Economics from the University of Warwick, she completed an MA in Creative Writing at the University of East Anglia, where she was a recipient of the 2018-19 Kowitz Scholarship. Her writing has been published in Lolwe, and shortlisted for the White Review Short Story Prize 2020.