A captivating debut space opera perfect for fans of Alex White and Becky Chambers, about two ships that fall into a space-time rift and discover they are from each other’s past and future. With their ships’ power running out, they have only once chance to escape the rift and save the future.

UNDER FORTUNATE STARS
by Ren Hutchings
Solaris/Rebellion Publishing, May 2022
(via JABberwocky Literary Agency) 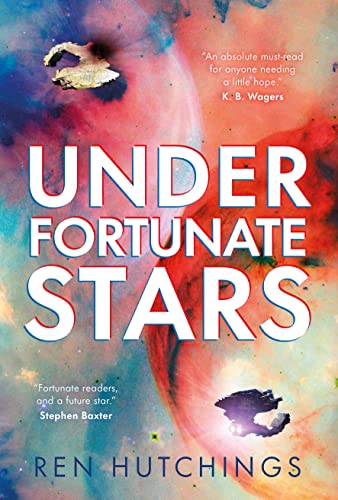 Two Ships. One chance to save the future. Fleeing the final days of the generations-long war with the alien Felen, smuggler Jereth Keeven’s freighter the Jonah breaks down in a strange rift in deep space, with little chance of rescue—until they encounter the research vessel Gallion, which claims to be from 152 years in the future.
The Gallion’s chief engineer Uma Ozakka has always been fascinated with the past, especially the tale of the Fortunate Five, who ended the war with the Felen. When the Gallion rescues a run-down junk freighter, Ozakka is shocked to recognize the Five’s legendary ship—and the Five’s famed leader, Eldric Leesongronski, among the crew.
But nothing else about Leesongronski and his crewmates seems to match up with the historical record. With their ships running out of power in the rift, more than the lives of both crews may be at stake…

Ren Hutchings is a speculative fiction writer, writing mentor, and history grad. She spent most of the past decade working in game dev while also plotting twisty space novels. She loves pop science, unexplained mysteries, 90s music, collecting outdated electronics, and pondering about alternate universes. Ren always drafts out of order, and almost everything she writes ends up involving a dash of time travel. You can find Ren online at renhutchings.com, and on social media as @voidcricket.