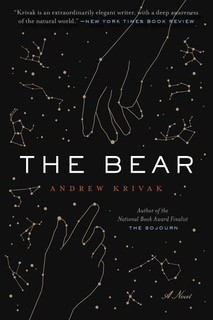 In an Edenic future, a girl and her father live close to the land in the shadow of a lone mountain. They possess a few remnants of civilization: some books, a pane of glass, a set of flint and steel, a comb. The father teaches the girl how to fish and hunt, the secrets of the seasons and the stars. He is preparing her for an adulthood in harmony with nature, for they are the last of humankind. But when the girl finds herself alone in an unknown landscape, it is a bear that will lead her back home through a vast wilderness that offers the greatest lessons of all, if she can only learn to listen. A cautionary tale of human fragility, of love and loss, The Bear is a stunning tribute to the beauty of nature’s dominion.“One of the marks of great fiction is how intensely a reader is pulled into [a writer’s] world, becoming an observer ofthe drama almost as if he or she were part of the narrative. The Sojourn is one of those great books. And so is The Signal Flame. . . . [Krivak] bring[s] out the vast compassion, humanity and love of his rich, fully developed characters, who, in the end, have limited control of their lives, just like the rest of us.” —Star Tribune.

Andrew Krivak is a National Book Award finalist and winner of both the Chautauqua Prize and Dayton Literary Peace Prize. He is also the author of A Long Retreat: In Search of a Religious Life, a memoir about his eight years in the Jesuit Order, and editor of The Letters of William Carlos Williams to Edgar Irving Williams, 1902–1912, which received the Louis L. Martz Prize. Krivak lives with his wife and three children in Massachusetts, and New Hampshire, in the shadow of Mount Monadnock, which inspired much of the landscape in The Bear.