One of the most uplifting stories you will ever read. Abram Goldberg is a beacon of joy and optimism, and a master of keeping perspective.

THE STRENGTH OF HOPE
by Abram Goldberg
with Fiona Harris
Affirm Press, September 2022
(via Kaplan/DeFiore Rights) 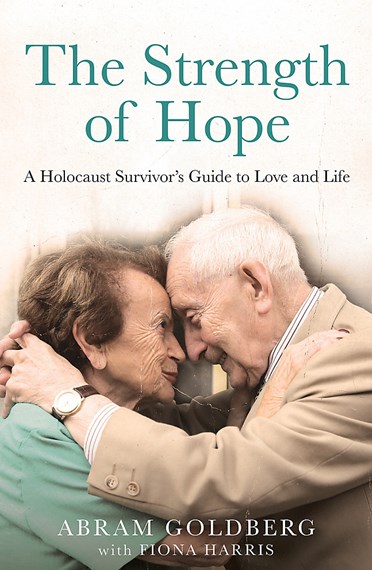 The day Abram and his mother arrived at Auschwitz death camp they both knew it would be her last. In their final moment together, Abram’s mum urged her nineteen-year-old son to ‘do everything humanly possible to survive, and tell people what happened here’. Then she was taken to a gas chamber and murdered. Abram had already endured and survived so much until that moment, but with his strength of hope, sometimes reduced to a flicker, he survived.
After liberation, Abram eventually found his way to Belgium, where he met the love of his life, fellow Auschwitz survivor Cesia. The young couple came to Australia, where that flicker of hope grew as bright as the sun, illuminating everything they touched and everyone who came into their sphere. Without bitterness and always with perspective, Abram has never forgotten his mother’s last words to him. And in their seventy-five years of marriage, Abram and Cesia have remained dedicated to educating people about the Holocaust and to living their lives to the fullest in tribute to its victims.
THE STRENGTH OF HOPE is full of wisdom, insight and daring, but at its heart it is a love story: for Cesia, for Australia and for life itself.

Abram Goldberg was born in Łódź, Poland, in 1924. Following the Nazi invasion, Abe and his parents were imprisoned in Łódź Ghetto. In 1944, Abe and his mother were sent to Auschwitz, where his mother was gassed upon arrival. Abe was sent to a series of camps before being liberated in 1945. Abe met his wife, Cesia, in 1946. They moved to Melbourne, Australia, in 1951, where they had two children and ran various restaurants including the iconic, Goldy’s. Abe has been volunteering at the Melbourn Holocaust Museum since 1984 and remains a member of the executive board. Abram was awarded an OAM in 2013.

What is “woman” if not “mother”? Anything she wants to be.

WOMEN WITHOUT KIDS:
The Revolutionary Rise of an Unsung Sisterhood
by Ruby Warrington
Publisher, March 2023
(via Kaplan/DeFiore Rights)

Foregoing motherhood has traditionally marked a woman as “other.” With no official place setting for her in our society, she has hovered on the sidelines: the quirky girl, the neurotic career obsessive, the “eccentric” aunt. Instead of continuing to paint women without kids as sad, self-obsessed, or somehow dysfunctional, what if we saw them as boldly forging a first-in-a-civilization vision for a fully autonomous womankind? Or as journalist and thought leader Ruby Warrington asks, What if being a woman without kids were in fact its own kind of legacy?
Taking in themes from intergenerational healing to feminism to environmentalism, this personal look and anthropological dig into a stubbornly taboo topic is a timely and brave reframing of what it means not to be a mom. Our experiences and discourse around non-motherhood are central to women’s ongoing fight for gender equality. And whether we are childless by design or circumstance, we can live without regret, shame, or compromise.
Bold and tenderhearted, WOMEN WITHOUT KIDS seeks first and foremost to help valorize a path that is the natural consequence of women having more say about the choices we make and how our lives play out. Within this, it unites the unsung sisterhood of non-mothers―no longer pariahs or misfits, but as a vital part of our evolution and collective healing as women, as humans, and as a global family.

Ruby Warrington is a British-born author, editor, and publishing consultant. Recognized as a true thought leader in the wellness space, Ruby has the unique ability to identify issues that are destined to become part of the cultural narrative. Her previous books include Material Girl, Mystical World; Sober Curious; and The Sober Curious Reset.

A gentle and powerful look at how small actions can make a big impact.

After Raccoon’s home burns down in a lightning storm, his friends don’t know what they can do to help. Squirrel, Beaver, Mouse, Badger, and Rabbit all go back to their own homes, trying to focus on something other than Raccoon’s tragedy. But each animal discovers one small thing they can do for Raccoon—and it turns out that each small act may not be so small after all.

Marsha Diane Arnold is a multi-award-winning picture-book author of twenty-three books, with over one million copies sold. Her books have garnered state book awards and honors such as multiple Junior Library Guild selections. Marsha is a member of SCBWI and currently lives in Florida.
Laura Watkins has illustrated international children’s books, designed greeting cards, painted murals, and worked in art galleries. She is the winner of The Northern Illustration prize. Laura lives in London with her Red Setters, pens, pencils, and chocolate.

Fans of Netflix’s Outer Banks will devour this contemporary YA novel with a propulsive mystery about one girl’s search for her town’s legendary sunken treasure in order to clear her family’s name and save her future. 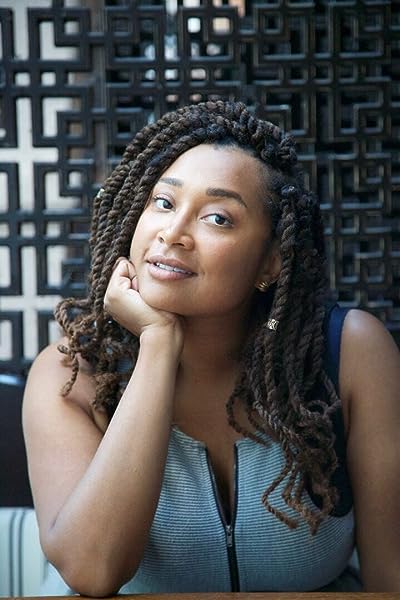 Some treasures are meant to stay buried . . . Casey’s life in Langston has been charmed. She’s the queen bee of her prep school, a shoe-in for prom queen, and on her way to the Ivy League come fall. She can’t wait to leave the whole town of Langston behind her. That is until her father loses his job and she finds herself on the brink of losing her ticket out of town.
The town of Langston is known for its picturesque lake and robust summer tourism. Everyone who lives in town has heard the rumors at some point—there is a treasure buried deep below the surface that no one has ever been able to find. Few people actually believe in the treasure, and even fewer have searched for it. But some have tried . . .
Suddenly an outcast from her popular squad, Casey falls in with a new group of friends who are exactly the opposite of her usual crowd, but are more accepting. Together they devise a plan to find the elusive treasure, in a quest to get the money and save Casey’s family and her future. But what they find is much more complicated than just a pile of gold. With thrilling twists and turns and high stakes adventure, fans of Outer Banks will devour this summer adventure.

Candace Buford has been an avid reader since childhood―always looking for stories with strong and complex POCs. She graduated from Duke University with a degree in German Literature, which exposed her to the delightfully creepy side of storytelling by writers like Kafka and Brecht. She also holds a law degree from Penn State Law School and a business degree from Duke’s Fuqua School of Business. Raised in Houston, Candace currently lives in the heart of Texas, where you can find her huddled in café corners, scribbling away in her notebook. She shares her life with a rocket scientist and a Plott Hound, who both ensure there is never a dull day. Candace is also the author of Kneel and Whatever Happens, a Julie and the Phantoms original novel.

The Blue Bloods are back…more fanged and fabulous than ever.

BLUE BLOODS: AFTER LIFE (July 2022)
The Blue Bloods are back…more fanged and fabulous than ever.
After defeating Lucifer and sacrificing the love of her life, Jack, Schuyler wakes up back in New York safe and sound. Only it’s not quite the New York she knows, and she’s not in her regular body. She looks different and feels different and so does everyone else. Schuyler soon discovers that in this world, her best friend has a different last name, her parents are both alive and well and one of them is an entirely different person, and the love of her life? Not so dead after all. The catch? Jack has no idea who she is.
As it turns out, Schuyler is not in her New York. She’s not even in her universe. This is an alternate reality. One where Lucifer is alive and well and acting as mayor of New York, Blue Bloods are luring humans to clinics to drain their blood, and Jack is Lucifer’s right hand man. Just when she thinks all is lost, Schuyler is contacted by a familiar friend―the Silver Blood, Kingsley. The Kingsley from her world. He actually remembers the Schuyler she used to be! But he also has a theory, and it’s one she doesn’t like. That Schuyler was sent here to defeat Lucifer. Again. And that she’s the only person in this universe or any universe that can defeat him.

BLUE BLOODS: AFTER DEATH (July 2023)
She may be down . . . but her fangs are out.
After defeating Lucifer and saving the world, Schuyler Van Allen woke up in an entirely different reality and learned she had to do it all over again. Find the villain, take him down, save the world. But after losing her only allies, Jack Force—who ran off to protect her—and Kingsley Martin—who was captured and killed by the enemy, Schuyler has to face facts. She’s going to have to do this alone . . . or is she?
When a mysterious new girl named Eoife shows up at Duchesne Academy, Schuyler at first thinks she must be yet another enemy, but she soon finds out that Eoife could be the answer Schuyler’s been looking for. A member of an ages old secret society of heroes called the Palladins, Eoife is here to help—and she has friends—lots of them. United with another unlikely ally in Max Force, the group might just have a fighting chance—if they can find and rescue Jack, get Max’s Blue Blood powers back, solve the theory of chaos magic and take down a friend turned foe. Oh, and fight off an army of Silver Bloods and otherworldly monsters led by the devil himself. 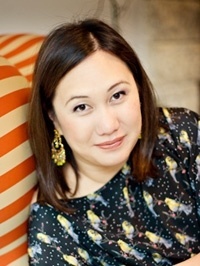 Can Schuyler finally put an end to the war between heaven and hell? Or will she have another world to save each time she opens her eyes?

Melissa de la Cruz is the author of the #1 New York Times best-selling Isle of the Lost series, as well as many other best-selling novels, including Alex & Eliza and all the books in the Blue Bloods series: Blue Bloods, Masquerade, Revelations, The Van Alen Legacy, Keys to the Repository, Misguided Angel, Bloody Valentine, Lost in Time, and Gates of Paradise. She lives in Los Angeles, California, with her husband and daughter.