This awesomely illustrated new middle-grade trilogy from the creators of Rickety Stitch is Dungeons & Dragons meets The Last Kids on Earth and Fablehaven! 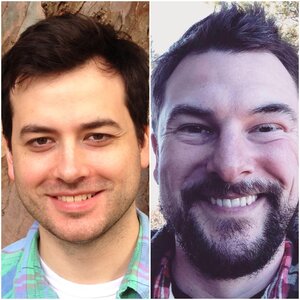 Coop Cooperson is the only human kid at Dungeoneer Academy, a school for future explorers in the Land of Eem, a world of monsters, mazes, mayhem—and even magic! Coop is surrounded by great friends—Oggie (hulking, sensitive bugbear), Mindy (whiz kid imp), and Daz (would-be class superstar boggart, if she only applied herself). Together, they become literal lifesavers when a school-trip-gone-wrong flings the kids into an adventure that puts all their Dungeoneer skills to the test. As Coop and his misfit friends try to find their way home, they’ll face more than their own fears to overcome a menagerie of dangerous creatures, obstacles, and a mysterious enemy from the Academy’s past.

James Parks & Ben Costa have been friends since the 2nd grade, and always loved making stuff together. It all began in grade school, drawing superhero comics with crayons and construction paper. In high school, they spent hours making wacky homemade movies, and as college roommates, they wrote comics and short fiction, coming up with the idea that would become Rickety Stitch and the Gelatinous Goo, their first published graphic novel series. They love fantasy, and strive to craft tales that celebrate the adventures of unlikely heroes. They grew up playing tabletop roleplaying games like Dungeons and Dragons, creating countless characters and collaborative worlds. It’s a pastime that’s paved the way for their creative careers, and they still play with the same friends to this day.