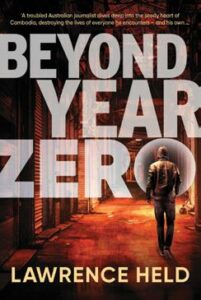 Carl Meissner is a 32-year-old unemployed journalist who was fired over his reporting of a paedophile scandal involving a prominent Sydney judge, and is hired by Joe Goldman, a rich currency trader/property developer, to find his missing twin brother, whom a private detective has traced to Cambodia.
BEYOND YEAR ZERO is the story of Carl’s journey into the dark heart of Cambodia – and simultaneously into himself – along the way becoming entangled in the lives of the mysterious ‘Bible Bill’ Butt and the two beautiful Eurasian sisters, Bopha and Dara, and being forced to confront Cambodia’s dark underworld of child pornography, trafficking in human body parts, personal and political corruption, cannibalism, incest, lust and drugs. Having got himself into this seething milieu, where the only certainties are cruelty and violence, Carl then has to get himself out …

Lawrence Held trained at the ‘Webber Douglas Academy of Dramatic Art’ (London), worked in theatre and television in the UK and Europe, presented a ninepart series for the BBC, acted in Waiting for Godot and Endgame, developed scripts for ‘Film Victoria’ and published Once A Jolly Swagperson (Pan Macmillan).