An epistolary novel about a man who has been hailed a small-town hero in the wake of a devastating tragedy and his struggle to help heal a broken community while grieving the loss of his wife, who he insists visits him every night in the form of an angel.

WE ARE THE LIGHT
by Matthew Quick
‎ Avid Reader Press, November 2022
(via Sterling Lord Literistic) 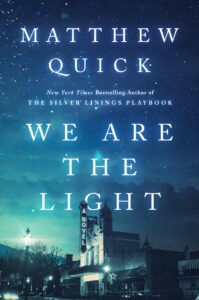 Lucas Goodgame lives in a small town in Pennsylvania, a community that has been torn apart by a recent tragedy at the local movie house. Everyone in town sees Lucas as a hero—everyone, that is, except Lucas himself. Lucas spends his time writing letters to his former Jungian analyst Karl, and he insists that his deceased wife Darcy visits him every night in the form of an angel. It is only when 18-year-old Eli, a young man who the community has ostracized, begins camping out in Lucas’s backyard that an unlikely alliance forms and the two begin a journey to heal their neighbors and, most importantly, themselves.

Matthew Quick is the New York Times bestselling author of The Silver Linings Playbook, which was made into an Oscar-winning film. His young adult novel, Sorta Like a Rock Star, was made into a Netflix movie called All Together Now and was the most popular streaming film there for several weeks. Quick has also published three other adult novels, The Good Luck of Right Now, Love May Fail, and The Reason You’re Alive. In addition to Sorta Like a Rock Star, he has published the young adult novels Boy21, Forgive me Leonard Peacock and Every Exquisite Thing. His work has been translated into more than 30 languages. He has received a PEN/Hemingway Award Honorable Mention, was an LA Times Book Prize finalist, and The Hollywood Reporter named Quick one of Hollywood’s “25 Most Powerful Authors.” All of his books not yet made into films are currently in development. Matthew lives with his wife, novelist Alicia Bessette, in North Carolina’s Outer Banks.