A cat explains the world to us: a soulful and funny novel with depth and little philosophical lessons about life. For readers of Matt Haig and Fredrik Backman. 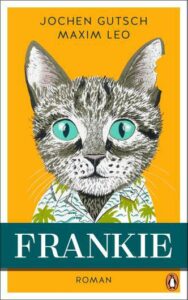 Imagine you’re looking for the meaning of life – and end up concussing a cat with a pepper mill instead…
Richard Gold has planned everything down to the last detail. Nothing will go wrong. Today’s the day he’ll take his own life. Or so he thinks. Because what Gold hasn’t counted on is that, instead of killing himself, he’ll acquire a new flatmate called Frankie. Frankie contributes nothing to the rent, keeps him up all night, wakes him in the morning, and otherwise ruthlessly exploits his hospitality. Nevertheless, they slowly become friends, at a time when Gold needs a friend more than anything…

Jochen Gutsch is a reporter at Spiegel magazine and a columnist at the Berliner Zeitung, and has won the Theodor Wolff Prize and the Henri Nannen Prize.
Maxim Leo is a columnist at the Berliner Zeitung, and has also won the Theodor Wolff Prize, as well as the European Book Prize. His book Red Love has been translated into numerous languages.
Together, they have conquered the bestseller lists with their hugely popular books Es ist nur eine Phase, Hase (« It’s just a phase, honey »), and Du bleibst mein Sieger, Tiger (« You’ll always be my winner, darling »), and their joint stage shows regularly sell out.