Who killed Brooke Donovan? It’s the biggest mystery of the summer, and everyone in Castle Cove thinks it’s the wrong guy. Fans of One of Us Is Lying and Riverdale can’t miss this page-turning who-done-it that’s sure to be the next must read Young Adult thriller!

THE AGATHAS
by Kathleen Glasgow & Liz Lawson
Delacorte, May 2022
(via Writers House) 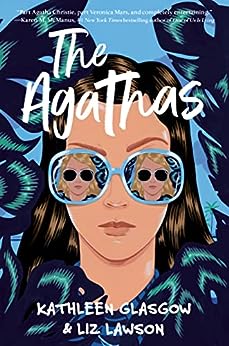 Last summer, Alice Ogilvie’s basketball-star boyfriend Steve dumped her. Then she disappeared for five days. She’s not talking, so where she went and what happened to her is the biggest mystery in Castle Cove. Or it was, at least. But now, another one of Steve’s girlfriends has vanished: Brooke Donovan, Alice’s ex–best friend. And it doesn’t look like Brooke will be coming back. . .
Enter Iris Adams, Alice’s tutor. Iris has her own reasons for wanting to disappear, though unlike Alice, she doesn’t have the money or the means. That could be changed by the hefty reward Brooke’s grandmother is offering to anyone who can share information about her granddaughter’s whereabouts. The police are convinced Steve is the culprit, but Alice isn’t so sure, and with Iris on her side, she just might be able to prove her theory.
In order to get the reward and prove Steve’s innocence, they need to figure out who killed Brooke Donovan. And luckily Alice has exactly what they need—the complete works of Agatha Christie. If there’s anyone that can teach the girls how to solve a mystery it’s the master herself. But the town of Castle Cove holds many secrets, and Alice and Iris have no idea how much danger they’re about to walk into.

“Full of twists, mysteries, and so much heart, The Agathas will keep you up late guessing who-exactly-dunit. Perfect for readers who like their thrillers with an extra dose of fun!” —Erin A. Craig, New York Times bestselling author of House of Salt and Sorrows
“A propulsive mystery starring two unlikely friends who give Nancy Drew a run for her money. With a totally satisfying and surprising ending, The Agathas is so, so much fun.” —Jessica Goodman, New York Times bestselling author of They’ll Never Catch Us and They Wish They Were Us
“This whip-smart novel had me hooked from page one, with wisecracking teen detectives, Agatha Christie references galore, and a killer mystery. I freakin’ loved this book, and in my opinion, Alice Ogilvie and Iris Adams can definitely sit with Nancy Drew and Veronica Mars at lunch.” —Kate Williams, author of the Babysitters Coven series and Never Coming Home
« Full of witty writing, banter, and adventure…readers will delight at the girls’ creative ways of drawing upon Agatha Christie to solve Castle Cove’s biggest head-scratcher of all time. » —Booklist
« The mystery thrills and gratifies thanks to escalating stakes and devastating reveals. » —Publishers Weekly

Kathleen Glasgow is the New York Times bestselling author of Girl in Pieces,How to Make Friends with the Dark, and You’d Be Home Now. She lives and writes in Tucson, Arizona.
Liz Lawson is the author of The Lucky Ones (2020), which was a Kirkus Reviews Best Book of 2020. She lives outside of Washington DC with her family and two bratty cats.