What if you fell in love with the one person you’d sworn to destroy? Passionate and violent, THE BRIDGE KINGDOM is a seductive fantasy perfect for fans of From Blood and Ash and A Court of Thorns and Roses. 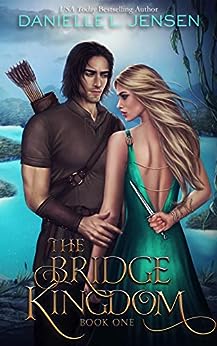 A warrior princess trained in isolation, Lara is driven by two certainties. The first is that King Aren of the Bridge Kingdom is her enemy. And the second is that she’ll be the one to bring him to his knees.
The only route through a storm-ravaged world, the Bridge Kingdom enriches itself and deprives its rivals, including Lara’s homeland. So when she’s sent as a bride under the guise of peace, Lara is prepared to do whatever it takes to fracture its impenetrable defenses. And the defenses of its king.
Yet as she infiltrates her new home and gains a deeper understanding of the war to possess the bridge, Lara begins to question whether she’s the hero or the villain. And as her feelings for Aren transform from frosty hostility to fierce passion, Lara must choose which kingdom she’ll save… and which kingdom she’ll destroy.

“An epic, action-packed tale of love, revenge, and betrayal.” —Jennifer Estep, New York Times bestselling author of Kill the Queen
“Exquisite, phenomenal, and sexy, THE BRIDGE KINGDOM is the epitome of fantasy romance perfection. I adored Jensen’s world and characters. Aren and Lara were magnificent individually and together, a couple you’ll root for from beginning to end. »—Olivia Wildenstein, USA Today bestselling author of Feather

Danielle L. Jensen is the USA Today bestselling author of The Malediction Novels: Stolen Songbird, Hidden Huntress, Warrior Witch, and The Broken Ones, as well as the Bridge Kingdom series and the Dark Shores series. She lives with her family in Calgary, Alberta.