“In her most magnificent novel yet, award-winning author Siphiwe Gloria Ndlovu showcases the history of a country transitioning from a colonial to a postcolonial state with a deft touch and a compassionate eye for poignant detail … Dickensian in its scope, with the proverbial bustling cast of colleagues both good and bad, villagers, guerrillas, neighbours, ex-soldiers, suburban madams, shopkeepers, would-be politicians and more, THE QUALITY OF MERCY proposes that ties of kinship and affiliation can never be completely broken – and that love can heal even the most grievous of wounds.” –Litnet 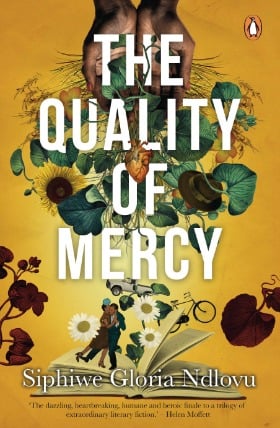 On the eve of his country’s independence, Spokes Moloi investigates his first ‘white case’ and finds a very confusing crime scene. Having recently been promoted to Chief Inspector, it is up to Spokes – a man of impeccable rectitude and moral spotlessness who is supported in all things by his paragon spouse, Loveness – to solve long-standing mysteries. His task now is to unravel the alleged murder of a man, Emil Coetzee, but also the tangled web that his life created.
Following on her award-winning novels The Theory of Flight and The History of Man, Siphiwe Gloria Ndlovu’s The Quality of Mercy is a novel of comfort and, indeed, mercy. Ndlovu weaves together elements of social comedy and cosy crime while examining the history of a country transitioning from a colonial to a postcolonial state. From the City of Kings and surrounding villages steps a cast of engaging characters who will criss-cross each other’s lives in delightful and poignant ways. Here, where everyone knows everyone else, the ties of kinship and affiliation can never be completely broken.
The final book in the City of Kings trilogy of three overlapping but standalone novels, preceded by The Theory of Flight and The History of Man. Ndlovu is the winner of the Windham Campbell Prize and the 2019 Sunday Times Fiction Prize.

Siphiwe Gloria Ndlovu is the author of the bestselling novel The Theory of Flight, winner of the 2019 Sunday Times Fiction Prize and currently a school set work, and its follow-up, The History of Man. A Winner of Yale University’s 2022 Windham Campbell Prize, she is a writer, filmmaker and academic who holds a PhD from Stanford University as well as master’s degrees in African Studies and Film from Ohio University. She has published research on Saartjie Baartman and she wrote, directed and edited the award-winning short film Graffiti. She was born in Bulawayo, Zimbabwe.