An engrossing and revealing study of why we deem certain animals “pests” and others not—from cats to rats, elephants to pigeons—and what this tells us about our own perceptions, beliefs, and actions, as well as our place in the natural world 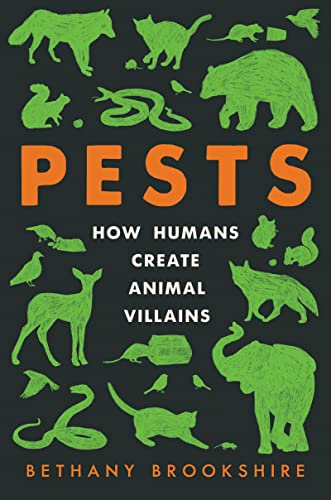 A squirrel in the garden. A rat in the wall. A pigeon on the street. Humans have spent so much of our history drawing a hard line between human spaces and wild places. When animals pop up where we don’t expect or want them, we respond with fear, rage, or simple annoyance. It’s no longer an animal. It’s a pest.
At the intersection of science, history, and narrative journalism, Pests is not a simple call to look closer at our urban ecosystem. It’s not a natural history of the animals we hate. Instead, this book is about us. It’s about what calling an animal a pest says about people, how we live, and what we want. It’s a story about human nature, and how we categorize the animals in our midst, including bears and coyotes, sparrows and snakes. Pet or pest? In many cases, it’s entirely a question of perspective.
Bethany Brookshire’s deeply researched and entirely entertaining book will show readers what there is to venerate in vermin, and help them appreciate how these animals have clawed their way to success as we did everything we could to ensure their failure. In the process, we will learn how the pests that annoy us tell us far more about humanity than they do about the animals themselves.

Bethany Brookshire is a science writer and a podcast host on the podcast Science for the People, where she interviews scientists and science writers about the science that will impact people’s lives. Her writing has appeared in Scientific American, Science News magazine, Science News for Students, The Atlantic, the Washington Post, Slate and other outlets. Bethany has a PhD in Physiology and Pharmacology from the Wake Forest University School of Medicine. She has a Bachelor of Arts in Philosophy and a Bachelor of Science in Biology from the College of William and Mary. She was a 2019-2020 Knight Science Journalism Fellow at MIT.