The birth of modernity: a journey through a trailblazing literary year in a turbulent world. 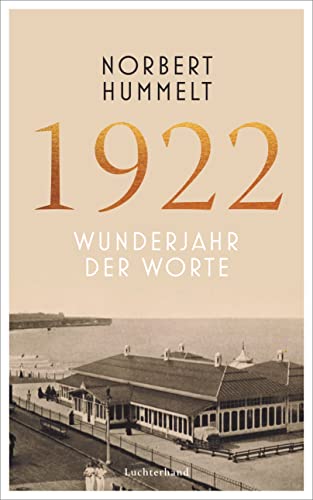 It’s an eventful year: a new Pope is elected in Rome, Howard Carter discovers the tomb of Tutankhamun, Albert Einstein receives the Nobel Prize, and the assassination of Germany’s foreign secretary Walther Rathenau foreshadows the rise of Adolf Hitler.
At the same time, 1922 is a year of unprecedented creative energy – Kandinsky is appointed to the Bauhaus in Dessau, Louis Armstrong makes jazz history in Chicago, and literary works by James Joyce, Virginia Woolf, Rainer Marie Rilke, Katherine Mansfield and T.S. Eliot that will change the course of world literature usher in the birth of modernity. In Paris, London, Trieste, Valais and Margate, Norbert Hummelt accompanies these authors through a groundbreaking literary year, capturing Europe’s highly charged atmosphere along the way.

Norbert Hummelt, born in 1962, works as a freelancing author in Berlin. In 2021, he received the Rainer Malkowski Prize for his life’s oeuvre. Further awards for his poems include the Rolf Dieter Brinkmann Prize, the Mondsee Lyric Prize, the Hermann Lenz Scholarship and Lower Rhine Literature Prize. He has been teaching at the German Literature Institute in Leipzig since 2002.