A hidden set of rules governs who owns what—explaining everything from whether you can recline your airplane seat to why HBO lets you borrow a password illegally—and in this lively and entertaining guide, two acclaimed law professors reveal how things become « mine. »

« Mine » is one of the first words babies learn. By the time we grow up, the idea of ownership seems natural, whether buying a cup of coffee or a house. But who controls the space behind your airplane seat: you reclining or the squished laptop user behind? Why is plagiarism wrong, but it’s okay to knock-off a recipe or a dress design? And after a snowstorm, why does a chair in the street hold your parking space in Chicago, but in New York you lose the space and the chair? MINE! explains these puzzles and many more. Surprisingly, there are just six simple stories that everyone uses to claim everything. Owners choose the story that steers us to do what they want. But we can always pick a different story. This is true not just for airplane seats, but also for battles over digital privacy, climate change, and wealth inequality. As Michael Heller and James Salzman show—in the spirited style of Freakonomics, Nudge, and Predictably Irrational—ownership is always up for grabs. With stories that are eye-opening, mind-bending, and sometimes infuriating, MINE! reveals the rules of ownership that secretly control our lives.

Michael Heller and James Salzman are among the world’s leading authorities on ownership. Michael Heller is the Lawrence A. Wien Professor of Real Estate Law at Columbia Law School. He is the author of The Gridlock Economy: How Too Much Ownership Wrecks Markets, Stops Innovation, and Costs Lives. James Salzman is the Donald Bren Distinguished Professor of Environmental Law, with joint appointments at the UCLA School of Law and the UCSB Bren School of the Environment. He is the author of Drinking Water: A History.

A must-read on the subject of personal branding.

How we present ourselves and how we are perceived by others are in effect part of our personality. The image we project and the roles we play are crucial to our success in both professional and private contexts. Tijen Onaran, a renowned speaker and networker, masterfully explains how to create a personal brand, find our own agenda, and shape how we are perceived online in social media and offline as well. In doing so, she recounts her own experiences in politics and the digital world, including her setbacks, learning effects, and her own personal branding.

Tijen Onaran is an entrepreneur, moderator, and speaker. She is dedicated to networking and diversity in business, especially in the technology branch, and founded « Global Digital Women », which is concerned with the networking and visibility of women in the digital industry. According to Capital she is one of the « Top 40 under 40 » and was the winner of the Inspiring Fifty Award in 2019 for « Women in Tech ».

The breakthroughs that change the course of science, business, and history are due in some part to the influence of geniuses and in some part to serendipity. LOONSHOTS is about engineering the forces of genius and serendipity to work for you rather than against you 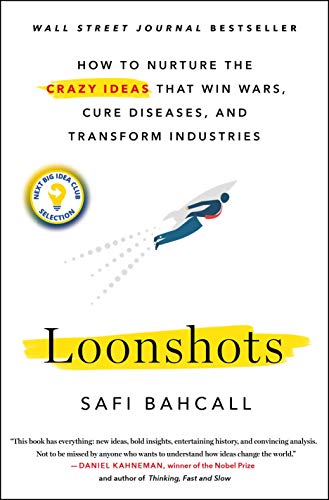 Every year, glossy magazines describe the winning cultures of innovative companies. Smiling employees raise gleaming new products like runners raising the Olympic torch. Leaders reveal their secrets. And then, so often, those companies crash and burn. Bahcall, a physicist and entrepreneur, finds answers in the science of phase transitions. The Nobel laureate Phil Anderson once captured the essence of phase transitions with the phrase “more is different.” The collective behaviors of liquids and solids—water flows, ice shatters—are more than the sum of their parts. They are something new: phases of matter. Bahcall shows why the collective behaviors of teams and companies are something new: phases of organization. Small changes in structure can transform teams from nurturing breakthroughs to inhibiting them, just like small changes in temperature can transform flowing water to rigid ice. Structure can matter more than culture. Drawing on examples from Aristotle to Star Wars, from Isaac Newton to Steve Jobs, Bahcall distills these ideas into practical rules that creatives, entrepreneurs, and managers can use to innovate faster and better. Along the way, readers will learn what James Bond and Lipitor have in common; why traffic jams appear out of nowhere on highways; and how these ideas and rules underlie the most consistently innovative organization in the world.

Safi Bahcall received his BA in physics from Harvard University and his PhD from Stanford University and was a Miller Postdoctoral Fellow at U.C. Berkeley. In 1998, Bahcall joined McKinsey & Company, where he advised investment banks and pharmaceutical companies on strategy, technology, and operations. Bahcall co-founded Synta with Lan Bo Chen in 2001. In 2008, Dr. Bahcall was named Ernst & Young New England Biotechnology/ Pharmaceutical Entrepreneur of the Year. He and his work was featured in a Malcolm Gladwell profile in The New Yorker magazine in 2010.

Talented humorist Ginny Hogan explores themes of sexism, workplace gender dynamics, and the challenges facing women at work (particularly in STEM fields) with disarming wit. Toxic Femininity includes fun short pieces (such as, “I’m Not A Sexist; I Also Ask My Male Colleagues If They’re Menstruating” and “How Silicon Valley Created The Perfect Meritocracy If You Specifically Happen To Be A Young, Straight, Well-Educated White Man”), true-false and multiple choice quizzes (including: “Are You Too Aggressive, or « Are You Politely Stating Your Opinion?” and Are You a True Feminist, a Male Feminist, a Feminist Just to Get Laid, or a Loaf of Bread?”),  and even some surrealist essays (such as “A Woman From The Year 3018 Visits a Tech Startup” and  “The Noise-Canceling Headphone’s Lament”). Toxic Femininity is a book that can be enjoyed in little sips or in one long drink.
The variety of the pieces and the illustrations make a lovely and gifty package—this product is perfect for a mentor encouraging her mentees, a big sister preparing her little sister for the work place, or shoring up your best friend after a rough day.
A conversation piece as much as a gift, the humorous nature of the work makes it possible to face topics that can be difficult to tackle head on; and we hope that this book will be able to serve not just as a gift but as a jumping off point for those hard-to have conversations that are a part of every work place environment.

Ginny Hogan is an NYC-based stand up comic and writer. She is a contributor to the New Yorker and McSweeney’s, and she’s the editor of the comedy blog Little Old Lady. She got her start as a data scientist in the mayonnaise industry, and since then she has tried to turn some of the uglier parts of the tech industry into comedy.

A guide to leading without losing your head, inspired by the bestselling books and smash television series Game of Thrones

“When you play the game of thrones, you win or you die. There is no middle ground.”—Cersei Lannister 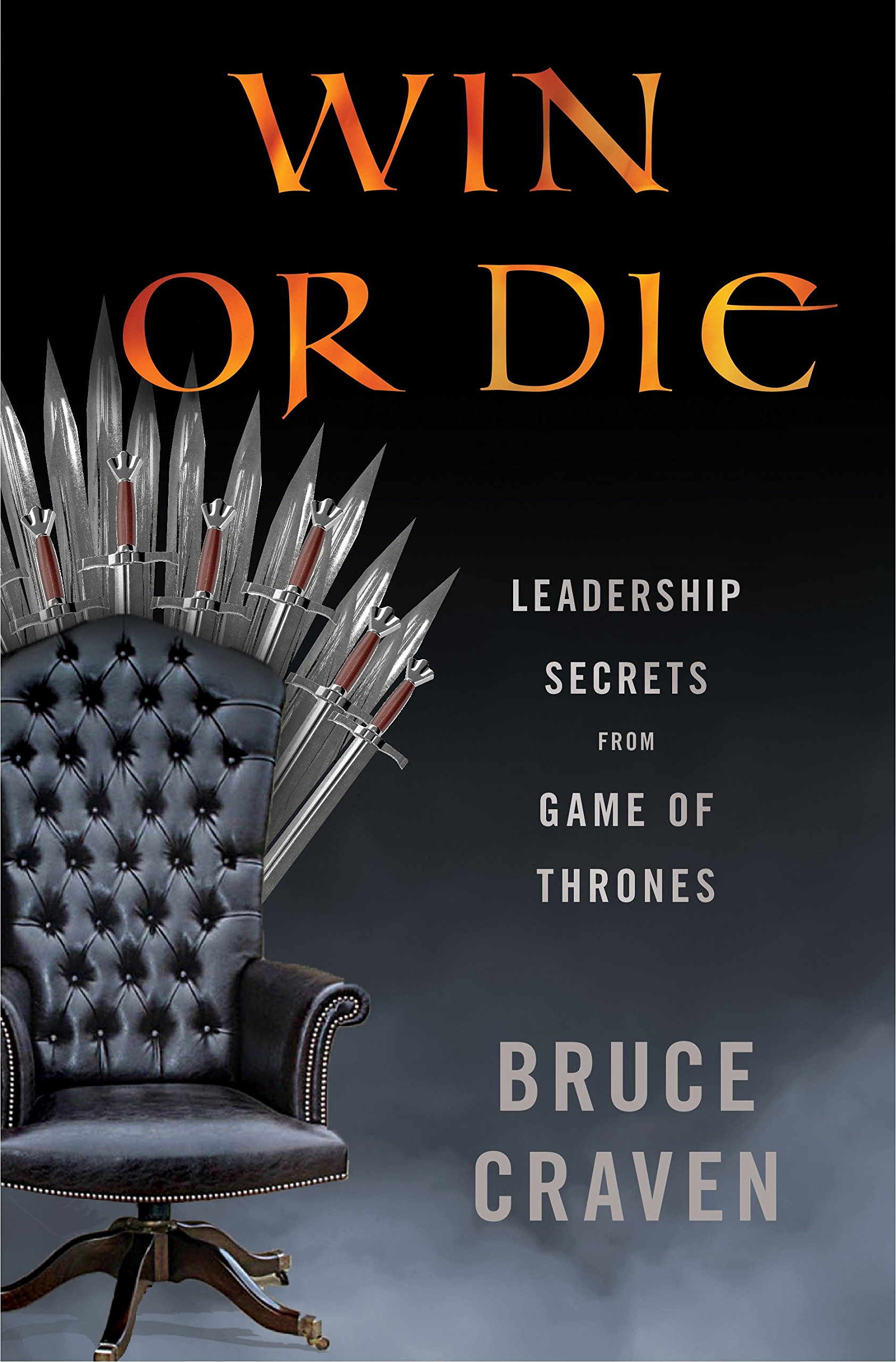 One of the great joys of Game of Thrones is strategizing what bold moves you’d make in this bloody, volatile world—from the comfort of your living room. And one of the great terrors of being a leader is knowing your real world can be just as brutal—and offices bring no comfort. Every day you’re presented with opportunities and challenges, and must decide which roads to follow, which risks to confront, when to deny an opportunity and when to pursue the call to adventure. And you won’t know whether you’ll profit or fail while you’re in the thick of it. In Win or Die: Leadership Secrets from Game of Thrones, Bruce Craven brilliantly analyzes the journeys of the best and worst leaders in Westeros, so that leaders can create their own narratives of success. Craven considers beloved characters such as Ned Stark, Jon Snow, Daenerys Targaryen, and Tyrion Lannister as they make terrible decisions and fatal mistakes, but also achieve incredible victories and surprising successes, learning and growing along their (often bloody) ways. Readers will learn how to face conflict and build resilience, develop contextual and emotional intelligence, develop their vision, and more. This entertaining and accessible guide will show readers how to turn danger into opportunity, even when dragons threaten.

Bruce Craven teaches his popular elective Leadership Through Fiction at Columbia Business School, where he also serves as the Director of Columbia’s Advanced Management Program. He has taught workshops in resilience and flexible thinking for organizations in the United States and Europe. He studied politics and literature at the University of California at Santa Cruz and has a MFA in Writing from Columbia University.