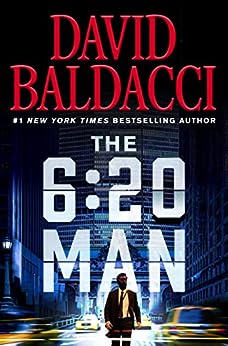 Every day without fail, Travis Devine puts on a cheap suit, grabs his faux-leather briefcase, and boards the 6:20 commuter train to Manhattan, where he works as an entry-level analyst at the city’s most prestigious investment firm. In the mornings, he gazes out the train window at the lavish homes of the uberwealthy, dreaming about joining their ranks. In the evenings, he listens to the fiscal news on his phone, already preparing for the next grueling day in the cutthroat realm of finance. Then one morning Devine’s tedious routine is shattered by an anonymous email: She is dead.
Sara Ewes, Devine’s coworker and former girlfriend, has been found hanging in a storage room of his office building—presumably a suicide, at least for now—prompting the NYPD to come calling on him. If that wasn’t enough, before the day is out, Devine receives another ominous visit, a confrontation that threatens to dredge up grim secrets from his past in the army unless he participates in a clandestine investigation into his firm. This treacherous role will take him from the impossibly glittering lives he once saw only through a train window, to the darkest corners of the country’s economic halls of power . . . where something rotten lurks. And apart from this high-stakes conspiracy, there’s a killer out there with their own agenda, and Devine is the bull’s-eye.

David Baldacci is a global #1 bestselling author, and one of the world’s favorite storytellers. His books are published in over forty-five languages and in more than eighty countries, with 150 million copies sold worldwide. His works have been adapted for both feature film and television. David Baldacci is also the cofounder, along with his wife, of the Wish You Well Foundation, a nonprofit organization dedicated to supporting literacy efforts across America. Still a resident of his native Virginia, he invites you to visit him at DavidBaldacci.com and his foundation at WishYouWellFoundation.org.

It’s 1949. When war veteran Aloysius Archer is released from Carderock Prison, he is sent to Poca City on parole with a short list of do’s and a much longer list of don’ts: do report regularly to his parole officer, don’t go to bars, certainly don’t drink alcohol, do get a job — and don’t ever associate with loose women. The small town quickly proves more complicated and dangerous than Archer’s years serving in the war or his time in jail. Within a single night, his search for gainful employment — and a stiff drink — leads him to a local bar, where he is hired for what seems like a simple job: to collect a debt owed to a powerful local businessman, Hank Pittleman. Soon Archer discovers that recovering the debt won’t be so easy. The indebted man has a furious grudge against Hank and refuses to pay; Hank’s clever mistress has her own designs on Archer; and both Hank and Archer’s stern parole officer, Miss Crabtree, are keeping a sharp eye on him. When a murder takes place right under Archer’s nose, police suspicions rise against the ex-convict, and Archer realizes that the crime could send him right back to prison . . . if he doesn’t use every skill in his arsenal to track down the real killer.

David Baldacci is a global #1 bestselling author, and one of the world’s favorite storytellers. His books are published in over forty-five languages and in more than eighty countries, with 150 million copies sold worldwide. His works have been adapted for both feature film and television. David Baldacci is also the cofounder, along with his wife, of the Wish You Well Foundation, a nonprofit organization dedicated to supporting literacy efforts across America. He’s still a resident of his native Virginia.

Convicted murderer Melvin Mars is counting down the last hours before his execution—for the violent killing of his parents twenty years earlier—when he’s granted an unexpected reprieve. Another man has confessed to the crime.
Amos Decker, newly hired on an FBI special task force, takes an interest in Mars’ case after discovering the striking similarities to his own life: Both men were talented football players with promising careers cut short by tragedy.  Both men’s families were brutally murdered.  And in both cases, another suspect came forward, years after the killing, to confess to the crime.  A suspect who may or may not have been telling the truth.
The confession has the potential to make Melvin Mars—guilty or not—a free man. Who wants Mars out of prison? And why now?
But when a member of Decker’s team disappears, it becomes clear that something much larger—and more sinister—than just one convicted criminal’s life hangs in the balance.  Decker will need all of his extraordinary brainpower to stop an innocent man from being executed.

David Baldacci made a big splash on the literary scene with the publication of his first novel, ABSOLUTE POWER, in 1996. A major motion picture adaptation followed, with Clint Eastwood as its director and star. In total, David has published 27 novels, all of which have been national and international bestsellers; several have been adapted for film and television. His novels have been translated into more than 45 languages and sold in more than 80 countries; over 110 million copies are in print worldwide. David has also published four novels for children. He has received numerous accolades for his writing; most recently, he was inducted into the International Crime Writing Hall of Fame and received the Barnes & Noble Writers for Writers Award.