Best-selling author Rick Riordan presents Graci Kim’s thrilling middle-grade debut series about an adopted Korean-American girl who discovers her heritage and her magic on a perilous journey to save her witch clan family.

Book 1: THE LAST FALLEN STAR (May 2021) – Riley Oh can’t wait to see her sister get initiated into the Gom clan, a powerful lineage of Korean healing witches their family has belonged to for generations. Her sister, Hattie, will earn her Gi bracelet and finally be able to cast spells without adult supervision. Although Riley is desperate to follow in her sister’s footsteps when she herself turns thirteen, she’s a saram–a person without magic. Riley was adopted, and despite having memorized every healing spell she’s ever heard, she often feels like the odd one out in her family and the gifted community.
Then Hattie gets an idea: what if the two of them could cast a spell that would allow Riley to share Hattie’s magic? Their sleuthing reveals a promising incantation in the family’s old spell book, and the sisters decide to perform it at Hattie’s initiation ceremony. If it works, no one will ever treat Riley as an outsider again. It’s a perfect plan!
Until it isn’t. When the sisters attempt to violate the laws of the Godrealm, Hattie’s life ends up hanging in the balance, and to save her Riley has to fulfill an impossible task: find the last fallen star. But what even is the star, and how can she find it?
As Riley embarks on her search, she finds herself meeting fantastic creatures and collaborating with her worst enemies. And when she uncovers secrets that challenge everything she has been taught to believe, Riley must decide what it means to be a witch, what it means to be family, and what it really means to belong. 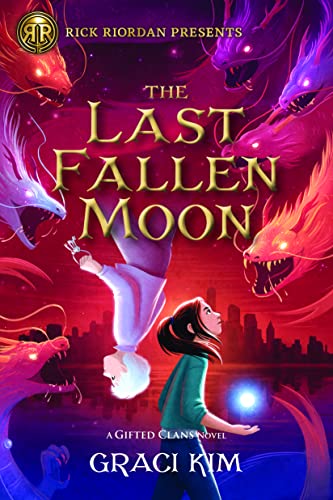 Book 2: THE LAST FALLEN MOON (June 2022) – For Riley Oh, life as the Godrealm’s last fallen star is not all it’s cracked up to be. Her new divine heritage doesn’t even come with cool magical powers; half of her friends and family (including her parents) can’t remember her; and to top it all off, the entire Gom clan is mad at her for killing the Cave Bear Goddess and stripping away their healing abilities.
But when their anger boils over and a group of witches curse Riley’s home, she knows it’s up to her to restore magic back to her clan – even if it means sneaking into the Spiritrealm.
Luckily, Riley has some backup. Along with her sister, Hattie, Riley meets Dahl, a heaven-born boy with shockingly white hair and a fondness for toilets who might not be telling the whole truth about who he is. Together they’ll fight vicious monsters, discover dark underwater worlds, and race to save the land of the dead from a fate that no one could have foreseen.
And this time, Riley won’t let anything get in her way. Because she can’t shake the feeling that something terrible is coming their way – and the gifted community is going to need all the powers they can get.

Book 3: THE LAST FALLEN REALM (June 2023) – Riley Oh wasn’t born into her family. Instead, as she recently discovered, she tumbled down to the earth many years ago as the last fallen star. Riley Oh also wasn’t born to be a witch. Like, at all―even her status as a divine celestial being comes with zilch in the magical powers department. And Riley Oh definitely wasn’t born to be a leader. But now the entire magical community thinks she and her soul-twin, Dahl, are meant to lead the world into the Age of the Final Eclipse (or whatever it is that the Haetae keeps saying they’re “destined” to do). Greeeat.
But ever since Riley killed the Cave Bear Goddess, she’s been a bit pre-occupied with one thing: waiting for the goddess’s sisters to get their revenge. And it looks like her wait is finally over―because as witches from around the world prepare for war, it seems as though the goddesses are preparing for something much worse. Something that will lure Riley and her friends deep into the realm of the gods. Into a world of humongous, talking moon bunnies; life-or-death mini-golf competitions; and…magical gummy candies?
And in order to save the world, Riley must do the one thing she was born to do: believe in herself.

« Graci Kim does such an amazing job of blending Korean mythology into the modern world, I am now wondering how I ever lived without knowing all this cool information. » –New York Times #1 best-selling author Rick Riordan

Graci Kim is the national best-selling author of The Last Fallen Star, the first book in the Gifted Clans trilogy. A Korean-Kiwi diplomat turned author, Graci writes about the magic she wants to see in the world. In a previous life she used to be a cooking show host, and she once ran a business that turned children’s drawings into cuddly toys. When she’s not lost in her imagination, you’ll find Graci drinking flat whites, eating ramyeon, and most likely hugging a dog (or ideally, many). She lives in New Zealand with her husband and daughter