Since her acclaimed novel A Carnivore’s Inquiry, Sabina Murray has been celebrated for her mastery of the gothic. Now in MUCKROSS ABBEY AND OTHER STORIES, she returns to the genre, bringing readers to haunted sites from a West Sutralian convent school to the moors of England to the shores of Cape Cod in ten strange tales that are layered, meta, and unforgettable.
From a twisted recasting of Daphne Du Maurier’s Rebecca, to an actor who dies for his art only to haunt his mother’s house, to the titular “Muckross Abbey,” an Irish chieftain burial site cursed by the specter of a flesh-eating groom—in this collection Murray gives us painters, writers, historians, and nuns all confronting the otherworldly in fantastically creepy ways. With notes of Wharton and James, Stoker and Shelley, now drawn into the present, these macabre stories are sure to captivate and chill.

Sabina Murray is the author of the novels The Human Zoo, Forgery, A Carnivore’s Inquiry, Slow Burn, and Valiant Gentlemen, as well as two short story collections, the Pen/Faulkner Award winning The Caprices, and Tales of the New World. She grew up in Australia and the Philippines and is currently a member of the MFA faculty at the University of Massachusetts, Amherst. She has also received a National Endowment for the Arts Fellowship, a Massachusetts Cultural Council Grant, a UMass Research and Creativity Award, and a Fred R. Brown Literary Award from the University of Pittsburgh, and has been a Guggenheim Fellow, a Bunting Fellow at Radcliffe, and a Michener Fellow at UT Austin. She is the writer of the screenplay for the film Beautiful Country, for which she was nominated for an Independent Spirit Award and a Norwegian Amanda Award.

“The four pieces in TELL ME A RIDDLE are lyrical bulletins of working-class family life, charged with emotional detail and delivered with an attention to the rhythms of consciousness more rigorous and powerful than most of what is called realism.” –A.O. Scott, New York Times

TELL ME A RIDDLE, REQUA I, AND OTHER WORKS
by Tillie Olsen
‎ University of Nebraska Press, 2013
(via the Frances Goldin Literary Agency)

A century after her birth, Tillie Olsen’s writing is as relevant as when it first appeared; indeed, the clarity and passion of her vision and style have, if anything, become even more striking over time. Collected here for the first time are several of Olsen’s nonfiction pieces about the 1930s, early journalism pieces, and short fiction, including the four beautifully crafted, highly celebrated stories originally published as TELL ME A RIDDLE: “I Stand Here Ironing,” “Hey Sailor, What Ship?,” “O Yes,” and “Tell Me a Riddle.” Also included, for the first time since it appeared in the 1971 Best American Short Stories, is “Requa I.”
In these stories, as in all of her work, Olsen set a new standard for the treatment of women and the poor and for the depiction of their lives and circumstances. In her hands, the hard truths about motherhood and marriage, domestic life, labor, and political conviction found expression in language of such poetic intensity and depth that their influence continues to be felt today.
An introduction by Olsen’s granddaughter, the poet Rebekah Edwards, and a foreword by her daughter Laurie Olsen provide a personal and generational context for the author’s work.

Tillie Olsen, 1912-2007, is internationally renowned for her powerful writing about the inner lives of working-class families, women, and minorities. Her books, Tell Me a Riddle, Yonnondio from the Thirties, Silences, and her essays and lectures, have been translated into twelve languages. In April 2021, A.O. Scott, the critic at large and co-chief film critic for The New York Times, wrote about Tillie Olsen for his essay series on influential American authors, saying she “helped change the study of American literature, opening its canon to neglected voices and traditions.”

AN EXCITING AND VIVID INNER LIFE
by Paul Dalla Rosa
Allen & Unwin, May 2022
(via Neon Literary) 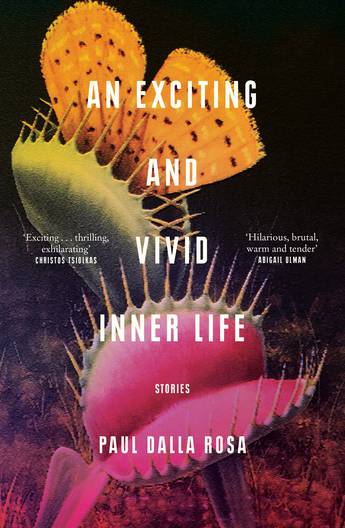 Whether working in food service or in high-end retail, lit by a laptop in a sex chat or by the camera of an acclaimed film director, sharing a dangerous apartment in the city, a rooming house in China or a vacation rental in Mallorca, the protagonists of the ten stories comprising Paul Dalla Rosa’s debut collection, An Exciting and Vivid Inner Life, navigate the spaces between aspiration and delusion, ambition and aimlessness, the curated profile and the unreliable body.
By turns unsparing and tender, Dalla Rosa explores our lives in late-stage Capitalism, where globalisation and its false promises of connectivity and equity leave us all further alienated and disenfranchised. His stories are small masterpieces of regret, futility and tenderness, dripping with acuity, irony and wit.
Like his acclaimed contemporary Ottessa Moshfegh and the legendary Lucia Berlin, Dalla Rosa is a masterful observer and unflinching eviscerator of our ugly, beautiful attempts at finding meaning in an ugly, beautiful world.

« The contemporary urgency of his stories is intoxicating…. This is such an exciting collection – writing this good is thrilling, exhilarating. » – Christos Tsiolkas, author of The Slap

Paul Dalla Rosa is a writer based in Melbourne, Australia. His stories have appeared in Granta, McSweeney’s, Meanjin and New York Tyrant. In 2019, his story ‘Comme’ was shortlisted for the Sunday Times Short Story Award. He is currently undertaking his PhD at RMIT University, studying the real within contemporary fiction. An Exciting and Vivid Inner Life is his debut collection.

This fourth wall–breaking middle-grade collection of spooky, scary, and spoopy stories for fans of Lemony Snicket and Scary Stories to Tell in the Dark might just help you survive the night in a house full of vampires.

If you are reading this book, then you must be trapped in that spooky house with those vampires. Sorry about that. But! You might just make it out if you manage to tell them one scary story each night in accordance with standard vampire rules. Don’t know any scary stories? Good thing you found this book! Every tale in this tome is true…more or less (more more than less).
You get a little bit of everything in this monster mash: from hitchhiking phantoms to women in white, a carnivore beast that loves a good vacation to a haunted mannequin with a bug problem, killer phones, concerned werewolves, you name it. Everything you need to keep those vampires on the edge of their seats—and well away from your neck.
But beware…don’t get too comfortable. Names have power, and if you whisper about too many things in the dark, they might just hear you.

Ben Acker is best known as the cocreator and writer of The Thrilling Adventure Hour, a monthly comedic variety stage show and podcast in the style of old-timey radio. That would have been enough. Acker has written for television, comic books, and actual radio. STORIES TO KEEP YOU ALIVE DESPITE VAMPIRES is his first book about defeating vampires with the power of storytelling. 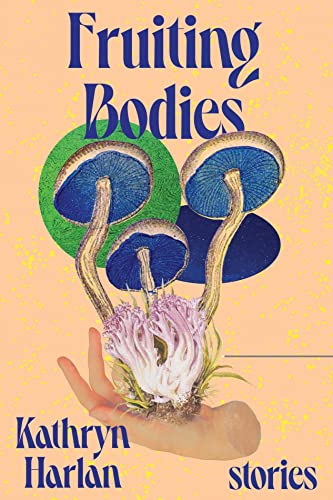 In stories that beckon and haunt, FRUITING BODIES ranges confidently from the fantastical to the gothic to the uncanny as it follows characters—mostly queer, mostly women—on the precipice of change. Echoes of timeless myth and folklore reverberate through urgent narratives of discovery, appetite, and coming-of-age in a time of crisis.
In “The Changeling,” two young cousins wait in dread for a new family member to arrive, convinced that he may be a dangerous supernatural creature. In “Endangered Animals,” Jane prepares to say goodbye to her almost-love while they road-trip across a country irrevocably altered by climate change. In “Take Only What Belongs to You,” a queer woman struggles with the personal history of an author she idolized, while in “Fiddler, Fool, Pair,” an anthropologist is drawn into a magical—and dangerous—gamble. In the title story, partners Agnes and Geb feast peacefully on the mushrooms that sprout from Agnes’s body—until an unwanted male guest disturbs their cloistered home.
Audacious, striking, and wholly original, FRUITING BODIES offers stories about knowledge in a world on the verge of collapse, knowledge that alternately empowers or devastates. Pulling beautifully, brazenly, from a variety of literary traditions, Kathryn Harlan firmly establishes herself as a thrilling new voice in fiction.

« A debut of astonishing range and beauty, nimble and magical and profound. In stunning prose, Kathryn Harlan’s wildly imaginative and daring stories reveal the anguish of growing up in a dying world. Her characters’ quest for knowledge―about themselves, their families, their bodies, and their yearnings―will thrill and haunt you. » ― Jessamine Chan, author of The School for Good Mothers

Kathryn Harlan received an MFA from the University of Wisconsin–Madison, where she now teaches writing. She was the recipient of the 2019 August Derleth Graduate Creative Writing Prize. Her work has appeared in the Gettysburg Review, Strange Horizons, and elsewhere.