With a new foreword from Robin Wall Kimmerer, New York Times-bestselling author of Braiding Sweetgrass—and an afterword from Bill McKibben—this special 25th anniversary edition of a beloved bestseller invites readers to see ourselves as part of nature, not separate.

The world is changing at a relentless pace. How can we slow down and act from a place of respect for all living things? THE SACRED BALANCE shows us how.
In this extensively updated new edition, David Suzuki reflects on the increasingly radical changes in science and nature—from the climate crisis to peak oil and the rise in clean energy—and examines what they mean for humankind. He also reflects on what we have learned by listening to Indigenous leaders, whose knowledge of the natural world is profound, and whose peoples are on the frontlines of protecting land and water around the world.
Drawing on his own experiences and those of others who have put their beliefs into action, The Sacred Balance combines science, philosophy, spirituality, and Indigenous knowledge to offer concrete suggestions for creating an ecologically sustainable future by rediscovering and addressing humanity’s basic needs.

“The most complete expression to date of an environmental ethic from one of the world’s leading conservation writers, combining science, theology, poetry, and philosophy to express a worldview towards which the human species must shift… THE SACRED BALANCE has a beautiful spirit.” —E.O. Wilson

David Suzuki is an internationally renowned geneticist, environmentalist, author of more than fifty books, and the founder of the David Suzuki Foundation.
Robin Wall Kimmerer is the author of the New York Times bestseller Braiding Sweetgrass and Gathering Moss. She is a mother, scientist, decorated professor, and enrolled member of the Citizen Potawatomi Nation.

Dispatches from the regenerative landscape, where pioneering entrepreneurs use their businesses as catalysts of change to go beyond sustainability and solve social and environmental problems. From international journalist and recipient of multiple fellowships from the Pulitzer Centeron Crisis Reporting, Esha Chhabra

WORKING TO RESTORE:
Harnessing the Power of Regenerative Business to Heal the World
by Esha Chhabra
‎ Beacon Press, March 2023

Political upheaval and social turmoil have peeled back the glitzy layers of capitalism to reveal an uncomfortable truth: historically, businesses have sourced materials from remote corners of the globe and moved millions of people and tons of cargo around the clock—all in the name of profit. Yet many of today’s startups are rewriting the rules of business: how it’s done, by whom, and, most importantly, for what purpose. Journalist Esha Chhabra draws on her decades of reporting to explore not only the “feel good, do good” factors of these restorative enterprises but also the nuanced realities and promise of regenerative business operations.
WORKING TO RESTORE examines revolutionary approaches in nine areas: agriculture, waste, supply chain, inclusivity for the collective good, women in the workforce, travel, health, energy, and finance. The companies profiled are solving global issues: promoting responsible production and consumption, creating equitable opportunities for all, encouraging climate action, and more. Chhabra highlights how their work moves beyond the greenwashed idea of “sustainability” into a new era of regeneration and restoration.
We meet and learn from people like:

• Marius Smit, founder of Plastic Whale, the first company to build boats entirely out of plastic waste removed from our oceans and waterways
• Sébastien Kopp and François-Ghislain Morillion, cofounders of Veja, a shoe brand whose mission it is to make the most ecologically sensitive shoes possible
• and many more innovators based out of many countries, including India, the Netherlands, the United Kingdom, France, Australia, and Mexico.

WORKING TO RESTORE highlights our most innovative entrepreneurs yet, those who understand that we cannot expect to create radical change if we try to “sustain” a system that has long been broken. Instead, their efforts of restoration and regeneration should be used as a model for other forward-thinking enterprises. Inspiring and engaging, this book shows it is possible for a business to thrive while living its mission and how the rules can be rewritten to put both the planet and its global citizens at the center.

Esha Chhabra is a writer who covers sustainability, international development, and the rise of mission-driven brands. She has spent the last decade contributing to a number of international and national publications such as The Guardian, New York Times, Wired UK, Washington Post, Atlantic, Fast Company, Forbes, Stanford Social Innovation Review, and more. She has been awarded multiple fellowships from the Pulitzer Center on Crisis Reporting.

A scientific exploration of the insect world that reveals the alarming diminishment of insect life across the globe in the era of climate change.

Drawn from the author’s astonishing and deeply disturbing article for the New York Times Magazine (which was downloaded over 1 million times in the first week alone), this will be a fascinating scientific exploration of the insect world that reveals, through extensive research with amateurs and entomologists in the field, the alarming diminishment of insect life across the globe in the era of climate change. The author plans to travel to different countries and environments, including Europe and Latin America, to explore the causes and urgent consequences of life on Earth without insects.

Brooke Jarvis is a contributing writer to The New York Times Magazine, and has written for The New Yorker, Wired, The California Sunday Magazine, GQ, Harper’s, and others. She also teaches feature writing at NYU’s American Journalism Online Master’s Program and mentors young science journalists through The Open Notebook and the Northwest Science Writers Association. Jarvis’ stories have been anthologized in The Best American Science and Nature Writing (Houghton-Mifflin); The Best American Travel Writing (Mariner Books); Love and Ruin: Tales of Obsession, Danger and Heartbreak from The Atavist Magazine (Norton); and New Stories We Tell: True Tales by America’s Next Generation of Great Women Journalists (The Sager Group).

Now is the moment to change course towards a future that is stable. A future worth living on a finite planet. This book is the operating manual to do just that.

EARTH FOR ALL
by The Club of Rome
New Society Publishing, Summer 2022

Almost 50 years ago a group of scientists published a remarkable book that shocked the world. The book, The Limits to Growth, was a warning to humanity. Based on the results from one of the first computer models of the global economy, it showed that population and industrial growth was pushing humanity towards a cliff. Fifty years on, the scenarios explored by the authors still hold true. We know we are crossing planetary boundaries. Inequality is causing deep instabilities in societies making it impossible to make long-term decisions for the benefit of all. There seems to be no way out.
EARTH FOR ALL is an antidote to despair. Using state-of-the-art computer models combining the global economy, population, health, inequality, food, and energy, a leading group of scientists and economic thought leaders present short- term levers for long-term systems change. They show for the first time it is possible to have long-term prosperity for all if key turnarounds are put in place and foundational paradigm shifts adopted. It is possible to stabilize our planet and ensure greater wellbeing for all. And it is possible to do this in a single generation: by 2050. This is arguably the most profound scientific and economic insight of our age.
EARTH FOR ALL describes five systemic shifts that need to happen to upend poverty and inequality, lift up marginalized people, and transform our food and energy systems. Decade by decade, the book details what needs to happen, where and when. It explores eight geographical areas, each with their own distinct characteristics: from the US to Asia and Africa; and recommends key principles for the necessary economic paradigm shifts to enable a new kind of growth within limits.

The Club of Rome is an NGO founded in 1968 to address the multiple crises facing humanity and the planet. Drawing on the know-how of its 100 members – notable scientists, economists, business leaders and former politicians – the organization seeks to define comprehensive solutions to the complex, interconnected challenges of our world. Its goal is to actively advocate for paradigm and systems shifts which will enable society to emerge from our current crises, by promoting a new way of being human, within a more resilient biosphere. Its seminal, best-selling 1972 report, The Limits to Growth, alerted the world to the consequences of the interactions between human systems and the health of our planet. Since then, more than 45 Reports have reinforced and expanded that intellectual foundation.

Award-winning climate journalist Eduardo Garcia offers a deeply researched and user-friendly guide to the things we can do every day to reduce climate change. Based on his popular New York Times column « One Thing You Can Do, » this fully illustrated book turns an overwhelming problem into simple actions.

THINGS YOU CAN DO:
How to Fight Climate Change and Reduce Waste
by Eduardo Garcia
illustrations by Sara Boccaccini Meadows
Ten Speed Press, April 2022 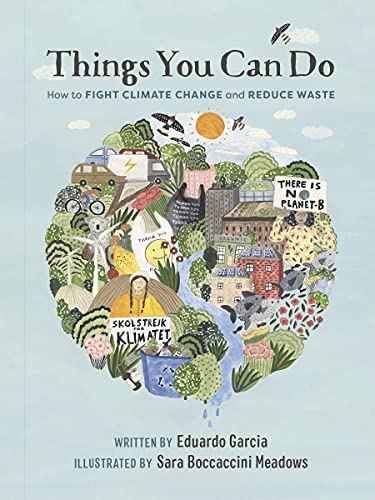 Award-winning climate journalist Eduardo Garcia offers a deeply researched and user-friendly guide to the things we can do every day to fight climate change. Based on his popular New York Times column “One Thing You Can Do,” this fully illustrated book proposes simple solutions for an overwhelming problem. No lectures here—just accessible and inspiring ideas to slash emissions and waste in our daily lives, with over 350 explanatory illustrations by talented painter Sara Boccaccini Meadows.
In each chapter, Garcia digs into the issue, explaining how everyday choices lead to carbon emissions, then delivers a wealth of “Things You Can Do” to make a positive impact, such as:

Delivering a decisive hit of knowledge with every turn of the page, THINGS YOU CAN DO is the book for people who want to know more—and do more—to save the planet.

Eduardo Garcia has written news stories and features from more than a dozen countries in his more than fifteen years as a journalist. A native of Spain, Eduardo cut his teeth working as a Reuters correspondent in Guatemala, Bolivia, Argentina, Colombia, and Ecuador. In recent years, Eduardo has written dozens of stories giving New York Times readers advice on how to reduce their carbon footprint. Eduardo strives to lead a sustainable lifestyle and believes in using words to empower people.
Sara Boccaccini Meadows is a print designer and illustrator living in Brooklyn, New York, originally from the rolling hills of the Peak District, England. Since arriving in New York City, she has been splitting her time between working as a textile designer, illustrator, and artist. She uses watercolor and gouache to create quirky illustrations and has collaborated with many amazing brands, publishers, and agencies.